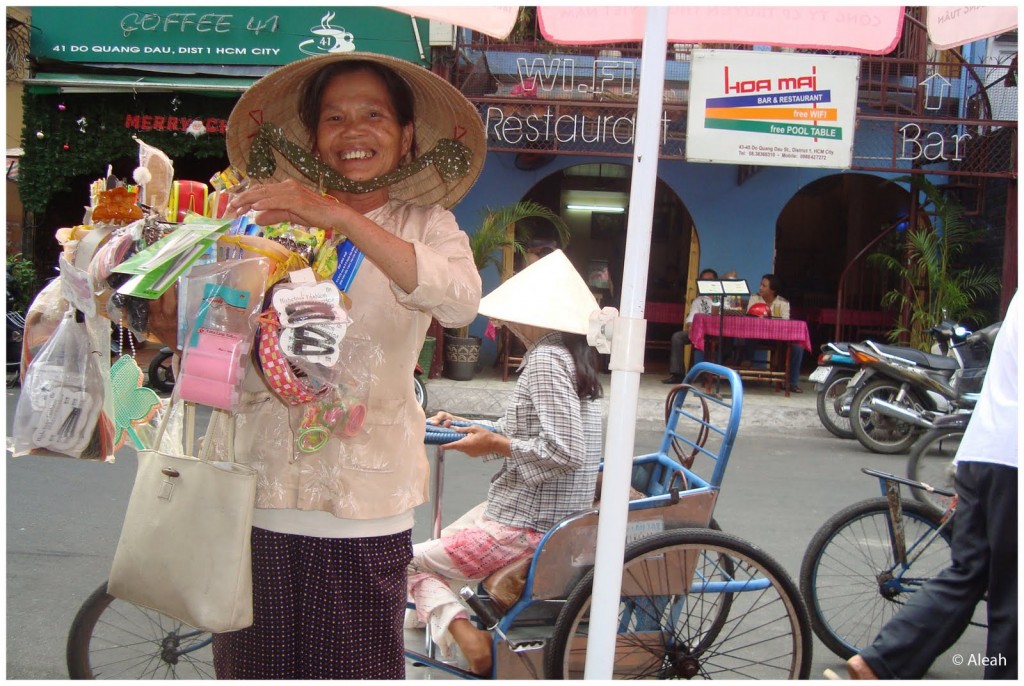 It’s not the frenetic, frantic feeling that I had when I first went there, but the kind of feeling that settles on you unknowingly, gradually, until one day you just realize that it is there.

I love the glaring contradictions of its culture, the order beneath the chaos of its millions of motorbikes, the many faces it presents to locals and visitors, and most of all, the sweetness and innocence of its people. A street vendor with her wares.

Back in May, I went around Saigon like crazy, frantic to absorb as much of the city as I could in five short days. However, this time, with twelve days, I tried to savor it more.

I took a lot of walks, without a map, without a plan, and without knowing how to communicate verbally aside from the elementary cảm ơn (thank you), xin loi (sorry, excuse me), xin chào (hello), and the recently-learned choyoy makwa (as it sounds like. I’m sure the correct spelling is far from it, but it is just an exclamation meaning almost anything).

To my surprise (or maybe not), I never got lost, and I always found my way back to the hotel.

I took the bus and had a chance to see parts of the city that I did not when I rode taxicabs (not to mention so much cheaper). I found a sports center I could run in, and although the track oval was so small it took me 35 rounds just to run for an hour (feeling like a hamster was not fun!), it was good enough for me.

I sat at sidewalk cafés and managed to order not only ca phe sau da (latte) but various com (rice) dishes as well. I had a very kind and very sweet landlady who considered me a personal friend despite the brevity of our acquaintance. I had a good time talking to her husband about trips they have taken to France and China, and I played with their grandchildren, two toddlers who could seemingly go on and on for hours.

I went to parties where I met a lot of locals—one treated me like a close friend at first sight, and took risks to let me ride on her bike even without a helmet; and another who drunkenly challenged me to a drinking session to prove that the local vodka I brought was the real thing.

I also met a viet kieu who firmly informed everyone that she was American, please, not Vietnamese, even though she was born in Vietnam to Vietnamese parents and only migrated to the US when she was already six.

I also met others who, despite the language barrier, made me feel as if I were a native Saigonite, welcomed anywhere and anytime in old Saigon. Some of the Couchsurfing members I met in Saigon.

I met a lot of foreign friends too, those who congregated along Pham Ngu Lao, De Tham, and other streets in the backpacker district.

There was the Dutch guy who has been traveling around the world for two years; the Filipino-Australian sporting the only cornrows I saw in Saigon; the German couple whose shaved heads raised eyebrows among the locals; and the young American who could speak three languages and who looked so much like a younger Tom Cruise.

There was the German guy who promised to bake a genuine German chocolate cake for us (I’ll take you up on it when you come here, Uli) and the tall Englishman who was robbed three times in two weeks and lost his laptop, two mobile phones, and a digital camera but not his faith in Saigon. A nice memory from Saigon.

There was also the Polish guy who came wanting to find a Vietnamese (or he said, maybe a Filipina) wife; the cute Spaniard who made me wish I could still speak Spanish beyond como se llama; and the middle-aged American chiropractor whose clients included big names in the MMA and UFC world, and who had had a vasectomy because he did not want any more children.

All these people came to Saigon and felt its subtle yet potent power, the power that made them wish they could stay just a little bit longer.

When I went to Siem Reap to see Angkor Wat, I admit that I did not do justice to Cambodia. All I could think of was to go back to Saigon, to the comforting sight of its motorbikes, to its ca phe sau da and delicious bahn mi (sandwich), and to the people who made me feel like I was home.

I did not exactly leave my heart in Saigon, but my memories of the city and its people will always be with me.

How My Favorite Country Betrayed Me

@ Jules: If you’re white, it’s really easy to feel like a king in Vietnam…or Thailand, or Cambodia, for that matter. Just be careful, though, because a lot of my friends have said that they had felt like they were treated as just a walking ATM and not a person!

I miss the never ending drone 24/7 of beeping horns. The city felt alive. I live in a city in the UK now and it’s not really the same. Nobody beeps. Just a few emergency vehicles now and then. But in Naam, felt like the city never slept.

I miss ultra cheap massages every day after pizza and a movie. All for under $10. I miss walking down the street as a westerner and knowing that at least 20 people are looking at me. Sure, I’m not a show off and don’t normally enjoy it, but in Naam, as a westerner, you feel like a celebrity!

@ Aravis: I’m sure she has. One room for $15 is good for two. Will send you her email address.

Your landlady sounds like my kind of landlady, Aleah!
Does her place have room for 3 or 4 woman travelers?
Email me! Thanks!

Thanks Ian. I guess my feelings about Saigon just surfaced.

Hello!I live in Vietnam, in Sai Gon. Nice to make firnd with you! U can reply me at my blog :