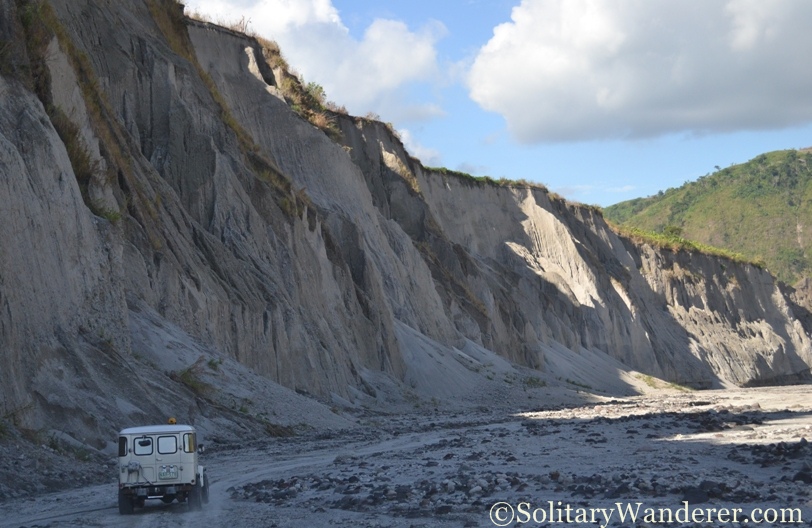 A day trip to see Mt. Pinatubo’s turquoise waters had always been in my bucket list.

Who wouldn’t be enchanted by its deep green color, the stark beauty of its rolling hills, or the charming smiles of the locals living there?

I set off to Tarlac one summer day in April together with 20+ other Couchsurfing members, full of anticipation and excitement to finally see this famous crater.

Unfortunately, I was disappointed. Pinatubo had another face that I hadn’t known before. When we arrived, the lake’s color was almost brown/black, and local guides said that it happens a lot especially when it rains. I had a hard time dealing with my disappointment; I woke up at 2am, trekked and did river crossings for almost two hours, and the lake’s color wasn’t green? The waters of Mt. Pinatubo was brown/black!

The trip, however, wasn’t totally a waste. I’d had a good time with CouchSurfing friends; in fact, to arrive on time at the meeting place, I had to surf the couch of MK, my first local host.

I met a lot of CS members there for the first time, too, and had fun with them talking about CS, photography, and our travels. These hills are made of mudflows from the 1991 eruption. 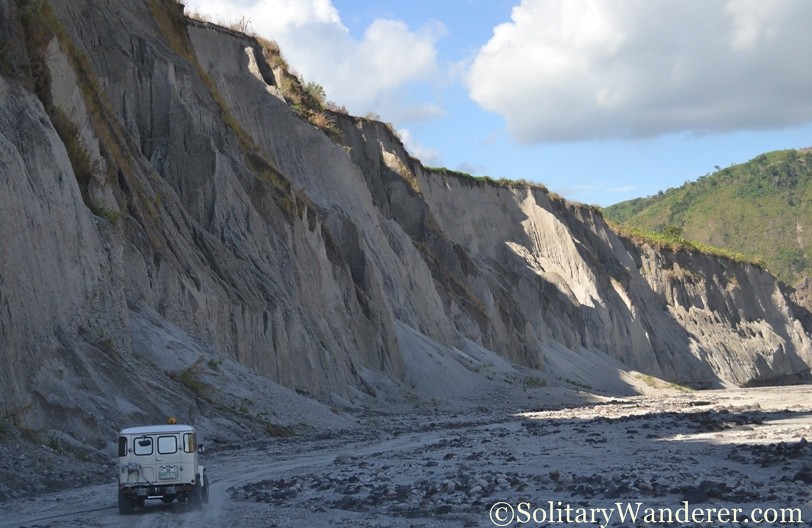 The way to Pinatubo was also breathtaking in a sense. Can you believe that these hills were all made of lahar—the mudflow from the Pinatubo eruption in 1991?

When Mt. Pinatubo erupted, it buried villages and people’s dreams, but it did replace them with something else—these unbelievable hills that became shaped by the winds and rains through the decades. The 4×4 offland vehicles used to bring us to the base camp in Pinatubo.

When we arrived at the Tourism office, we learned that the heavy rains the week before had rendered the “skyway” unpassable. Thus, after a 30-40 minute ride on these 4x4s, we had to hike for almost two hours on sharp stones, through the rolling hills and across rivers.

I had been wearing my New Balance at the start of the trek; when I saw that my feet would get wet, I changed into my Ipanema slippers. It turned out to be a very good decision!

All the way to Pinatubo and back, I had counted a total of seven (7) soles left on the trail. These had been casualties of the trek; the hikers’ shoes had fallen apart from all the sharp stones and uneven ground. 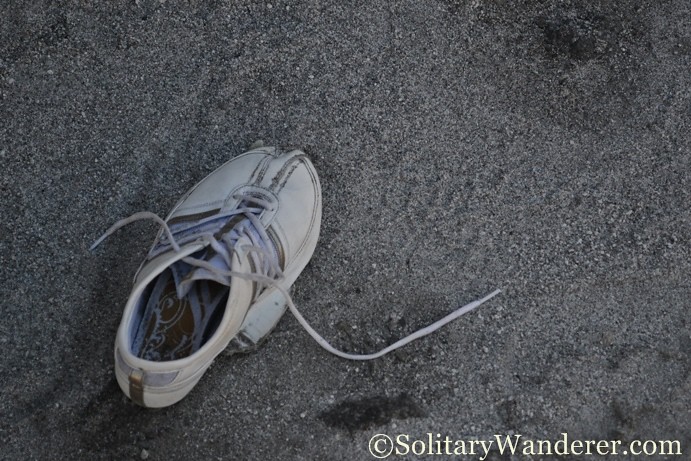 I had counted a total of 7 abandoned soles/shoes along the Pinatubo trail!

When we reached the crater, some of us swam while others took a nap. The lunch that came with the tour package was delicious; there was fish, salted eggs, vegetables, and water. If it wasn’t for my failed expectations, it would have been a perfect day.

Here are some of my tips if you are planning to trek to Pinatubo:

Do I recommend visiting Mt. Pinatubo? Absolutely. The breathtaking landscape is not to be missed. Will I go there again? Nope. Once is more than enough for me!

How to go to Mt. Pinatubo:

If you are trekking with a group, it would be better to rent a van to take you there directly. If commuting, you can take the Victory Liner bus going to Baguio, Lingayen, or Dagupan and get off at Capas, Tarlac. There are Victory Liners in EDSA/East Avenue, Cubao, and Pasay.

From Capas, you’ll have to go to the base camp in Brgy. Sta. Juliana. You can coordinate hiring a a 4×4 at the Tourism office there. Travel by 4×4 takes around 30 to 40 minutes, and the trek will also be around that long. If the skyway is closed, the trek can take at least 1 hour 30 minutes. You will also be asked to hire a guide. Our contact there is Wendell, +63919-608-4313. Have him help you with the rental of the vehicle and other arrangements.

How about you? Have you had a trip that disappointed you? Do share! 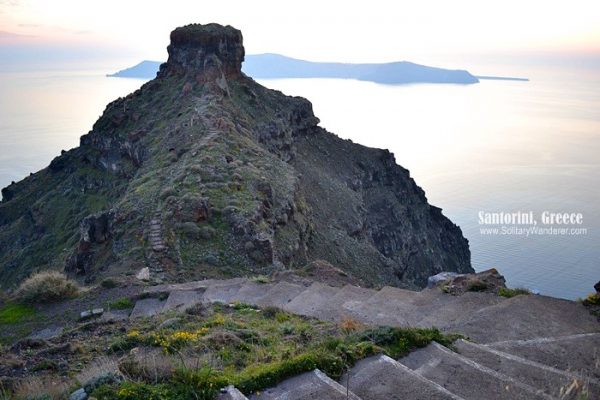 Sunset on Skaros Rock in Santorini

@ Anjville: I really really hope the water will be blue, for your sake hahaha Enjoy the trek!

Thanks for the information, Aleah! I am going there this Feb. 23, 2013. I hope I could trek successfully in Mt. Pinatubo. Your post is so helpful!

@ Sumi: Are you pushing through with your plans to go there this year?
@ Galwin: It was so funny seeing those shoes. Although I wish they didn’t leave their trash on the trail!
@ Mhel: LOL Armchair traveling at its best!
@ Ruth: Never been to Ilocos 🙁
@ Dhora: Go and do it! 🙂

I wish to conquer Mt. Pinatubo. It’s part of my bucket list.

This kind of travel adventure is a little extreme for me. The most exteme I did was during the 4×4 ride in Ilocos. But I think it is nice that the place is now considered a tourist destination 🙂

As much as I enjoyed reading through your adventure (well, except for that disappointing part about the water), I don’t think I can submit myself to such rigorous trekking. That’s why I’m grateful for travel bloggers like you! No kidding! 🙂

I’ve been meaning to trek Mt. Pinatubo. Or any other equally beautiful mountains, actually. But I have no proper gears yet!

This post showed me that I should come with proper gears or I might leave my shoes like that (pictured above).. and someone blog about it 🙂

Thanks for sharing, Aleah!

I want to visit this place too, but I think sa 2013 ko na siguro to mapupuntahan.. ^^ Hopefully when I get to visit Pinatubo though, mas clear na ang waters.

@ Ion: Yup, the Phils has so many beautiful places to explore!
@ Chinchan: I hope you won’t be disappointed with the lake’s color. Bad luck lang talaga ung sa amin.

and here’s another one. what a lovely site. this is on my list of to visits when we go back in philippines. getting there is an adventure, being there is peace, serenity!

@ Yodz: I agree, Pinatubo is certainly THE place to contemplate the beauty of nature.

Being on nature and traversing a demanding terrain in Pinatubo has taught me that life is simple, and you can cross any pass if you have the spirit. The mysterious appearance of a place, a tiny leaf or a colored rock on a trail can reveal to you something about the complexities of life hidden within.
Really awesome place!!!

@ Gay: Yeah, I’ve read your post. At least in our hike as well, I appreciated the landscape 🙂
@ Unikorna: Despite my disappointment, it’s really beautiful there. Thanks for dropping by my blog!

wow breathtaking adventures in spite of all your disappointment. Lovely pictures, all of them 🙂

I myself was one of the victim of Mt. Pinatubo during the eruption in 1991 and yet I never been there. Our house collapsed from the ash fall and sand fall, the earthquake was going every second for the whole night, I thought it was the end of the world for us, it was pretty scary like we would never see another day of our lives. Now I am planning to go visit this place next time I am over in the Philippines for holiday. Now, I became interested in visiting the place that once upon a time horrified me & thought that was the end of the world for us.

@ Grace: I know, right? They just left it lying there. I think the guides would pick them up, as hearing from other friends who’ve been there, that trail really destroys shoes. Aqua shoes? Maybe. Just don’t use something that’s been stored a long time since it makes the sole brittle.
@ Dylan: I indeed hope it will be blue-green when you visit. Still, turquoise or not, it’s still worth the trek. 😀

What a view! Another must see sight!
Hopefully, we’ll see that turquoise waters on our future visit. 🙂
Thanks for sharing!

Man, they should pick up those shoes. They are not biodegradable. Good thing you had the foresight to bring an extra pair. Do you think that aqua shoes can hack it through the trail? Because that could be another option.

@ BertN: That’s the way it should be, eh? We should learn how to “make lemonade when life throws us lemons.” Thanks for dropping by!
@ Chad: Good for you, then. I also enjoyed our ride back. I’m actually planning to write a blog post about one of the things we discussed 😀

I didn’t have any expectation….. so I thought it was great fun!

I have many trips that disappointed me but I learned to live with it. If the destination is a huge let down, I tell myself it is the travel that made it fun; if my traveling companions are a pain in the you-know-where, I say it is the destination that counted. I keep deluding myself into euphoric joy LOL.

@ Bon: I always bring 2 things wherever I go: slippers and umbrella hehe. I wasn’t worried about physical fitness. I can go brisk walking for hours even though I hadn’t run since last year.
@ Kuya Ed! I’m envious. It must have looked really great! I wish I’d joined the CS trips there before; their pictures look wonderful. Thanks much for dropping by my blog and leaving a comment. Hope I can join you in other CS outings too!

Your blog is so interesting and informative.

Was not able to join that CS trip. Next time I’ll do.

Sometimes, to be always prepared like bringing slippers is so helpful when it comes to trekking activities like you did in going to this destructive yet famed Mt. Pinatubo crater. Much that you are more physically prepared in a long hours of trekking. Indeed, this is a comprehensive post….with unbiased tips.:-). Thanks Aleah with this post.

@ Claire: I kinda regret I postponed going to Pinatubo before. I’m sure it was a real sight when it was still blue green.
@ Mervz: It’s good you’ve seen it in its glory 😀 I wore ordinary rubber slippers and got kalyo for it haha

trekking sandals or shoes is advisable since andming rocks dyan… been there in 2008, it’s sad to know that the water had already turned black… hope someday it’ll be back to its radiant turquoise color… 🙂

Our trek to Mt. Pinatubo was very memorable to me, it was the first entry on my blog and the trip where I first used my DSLR, (Natanggalan din ng swelas yung travelmate ko habang nagtitrek, legendary talaga sa mga sapatos ang Mt. Pinatubo 🙂