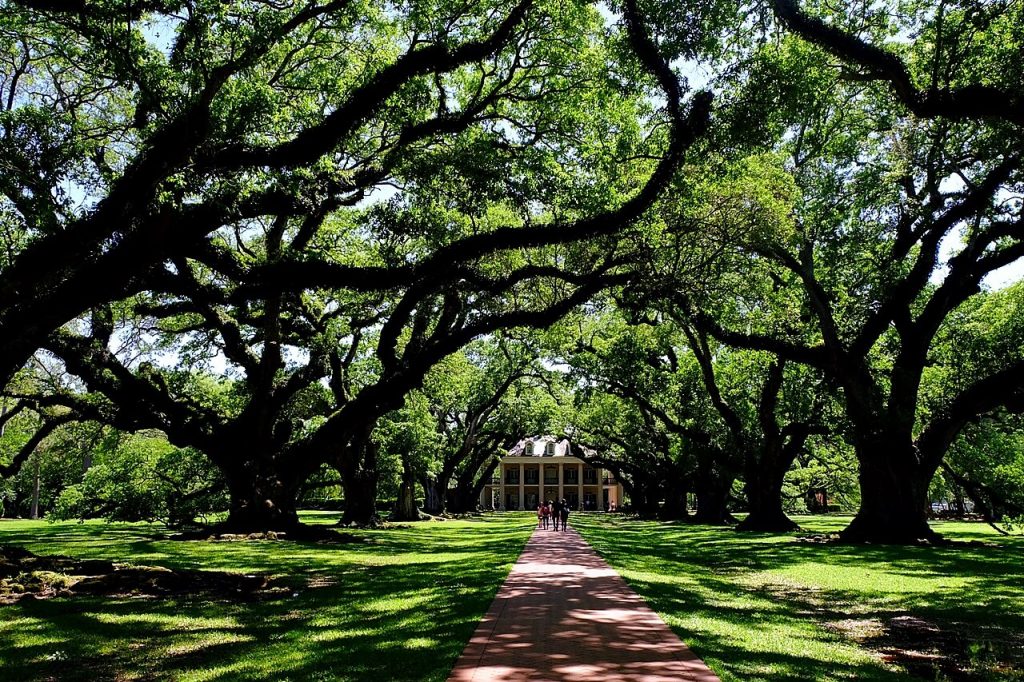 Things to Do in New Orleans: Oak Alley Plantation Tour

There are a lot of things to do in New Orleans; you can stay for weeks there and not exhaust everything it has to offer. I left New Orleans three months ago (after staying there for 4 months), and I still miss it every day. I’m hoping I can go back one day.

One of the highly recommended things to do when visiting New Orleans is to book a tour of the Oak Alley and other plantations. It will tell you a lot about how the rich lived in those times — you’d have an idea, of course, if you’d watched Gone with the Wind or Interview with the Vampire — but it’s very different to see the place where they lived in person. View of Oak Alley from the balcony of the Big House.

Louisiana has a rich history and culture, and part of that is due to the people slavery brought to the region. Slavery was established by European colonists in the 1700s, starting with the French and then the Spanish. It became a U.S. territory in 1803 (Read up on the Louisiana Purchase. If the U.S. bought the Philippines from Spain for US$20 million, Louisiana was bought for $15 million from France.).

Slavery, however, was not abolished until 1864, during the American Civil War. In fact, the demand for slaves even increased when it became part of the U.S., as the cotton gin had been invented already and people were needed to work in the cotton fields.

As an aside, a song I still remember from childhood, sang to me frequently by my grandmother, goes like this:

Gone are the days when my heart was young and gay

Gone are the toils of the cotton fields away

Gone to the fields of a better land I know

I hear those gentle voices calling, “Old Black Joe.” (Except that Lola would say, “Old Nene”, her name.)

How did my grandmother know that song? I never knew where she learned it as she passed away years ago, and the song never struck me as anything but a lullaby until I arrived in New Orleans. In any case, Louisiana’s slave history differed from the rest of the U.S. It’s a huge and complex issue, though, something I’m not qualified to talk in depth, so let me just summarize it (sorry for oversimplifying!): unlike in other parts of the country, Louisiana slaves (who came from the US, and from Spanish and French colonies in Africa) had rights — they could marry, were taught religion (Roman Catholic), and could stay together as a family.

Unfortunately, I only had the opportunity to do the Oak Alley Plantation tour, so I took it. Back of the Big House in Oak Alley.

Oak Alley Plantation is a 25-acre property home to the picturesque canopy of 28 southern live oak trees that are possibly over 300 years old. The plantation is located on the Mississippi River in Vacherie, around an hour from New Orleans. There are usually busloads of people visiting Oak Alley every day, and who can blame them (us?)? It’s gorgeous!

The land was originally owned by “King of Sugar” Valcour Aime, then one of the richest men in the South, and later sold to his brother-in-law Jacques Roman who had the Big House built by slave labor. When Roman died of TB in 1848, the management of the plantation went to his wife, Celina, who almost ran it to the ground with her overspending (She was a socialite. She often went to New Orleans to party as she hated living in the plantation.) until her son Henri took over.

Henri tried to undo his mother’s mismanagement, but with the end of slavery and other factors, he got in debt more and more and sold it until it ended up with Andrew and Josephine Stewart. It was Josephine who had the house restored and modernized, and had the garden made. She left the plantation to the Oak Alley Foundation when she died in 1972 and it became open to the public then.

Oak Alley Plantation tours can be booked with any travel agency in New Orleans — although I would recommend just booking it online via Tinggly.com — and it usually includes transportation and guided tour of the Big House. Here’s what you can see when you visit the Oak Alley Plantation (keep in mind you are only given 2 hours to explore the plantation grounds and exhibits). Room inside the Big House.

A tour of the Big House is one of the highlights of your visit to Oak Alley. The half-hourly guided tours — done by docents in the clothing of the time — provide a glimpse to how the owners lived in the 1800s.

One of the exhibits in the dining area showed a price list of the grocery items and other expenses at that time. There were all sorts of things listed: 2 dozen apples for 80 cents, Celina’s bill at a shop for $57, a pair of shoes for Roselia (a 13-year-old slave girl) for $1, 2 pounds of cheese for 40 cents, 1 month of schooling for all the slave children for $10, and 1 dozen handkerchiefs for $7. (Can you see how Celina had been spending?) A list of Oak Alley Plantation slaves and their worth.

The single most expensive one was Deterville, Roman’s right-hand man and later Henri’s. He was valued at $1,200 although history showed that he had a lot of autonomy as a slave and even handled and owned money. Deterville continued to work for the Romans even after slavery ended. He disappeared during the Civil War. One of the slave houses in Oak Alley (usually a duplex).

If you rely on the guide, you won’t get much information about slavery in the Oak Alley Plantation tour (which is why the Whitney Plantation is better in that area). However they do have a Slavery Exhibit at the back of the mansion, where the slaves’ houses were located.

To many visitors, seeing the Slavery Exhibit can be uncomfortable, especially when you consider how difficult it must have been for the many field slaves to plant, tend, and harvest sugarcane under the hot Louisiana sun. Interior of a slave house. It’s small and basic (look! a cat!). The Sick House serving the slaves at Oak Alley.

However, it is interesting to note that Oak Alley slaves enjoyed a certain degree of independence. They were able to grow their own crops like corn, which their masters bought from them. Owners of the plantation got to buy crops at a cheap price while the slaves got extra money to plant more crops, which allowed them to supplement their diet.

As a way to recognize the hard work of the slaves of Oak Alley, their names are written on a cabin wall in the slave quarters. The Sugarcane Exhibit and Theater

Like many rich estates in the area, Oak Alley was at one point a sugarcane plantation. In its heyday, demand for sugarcane came from all over, especially with the average person consuming about 50 pounds of sugar per year by 1870.

The Sugarcane Exhibit and Theater has a 3 dimensional map of the properties of the Roman family as well as displays on how sugarcane was grown and processed. You can also watch a short film while you’re there. So beautiful, isn’t it?

Your time visiting Oak Alley is limited to two hours, 30 minutes of which is already allotted to a tour of the Big House. Our guide booked us the latest tour possible so we could go around first. I spent too much of my time taking pictures of the front of the house where the canopy of oaks is, so it left little time for me to visit the Slave Exhibit.

So, budget your time. It’s nice to take photos of the oaks, but don’t expect to get one with no people in it, unless of course, you’re staying in the property and can go around before the horde arrives.

There’s a restaurant and cafe in the Big House, you can have lunch there or have the famed Mint Julep. Me being a budget traveler, I bought a po boy and brought it with me, and with my water, sat and had a picnic under one of the oak trees. Perfection!

I booked my Oak Alley Plantation tour via Tinggly ($79), it was straightforward with no issues. I just went to the bus pick-up location. There was a tour guide on board who told us about New Orleans and surroundings, and took care of booking our Big House tour. I would recommend them.

When I go back to New Orleans (hopefully next year, or whenever), I would definitely take the Whitney Plantation tour. The plantations of Louisiana are gorgeous, yes, but I think we must also know what else is behind the beauty, including slavery.

Have you done any New Orleans plantation tours? How was your experience? 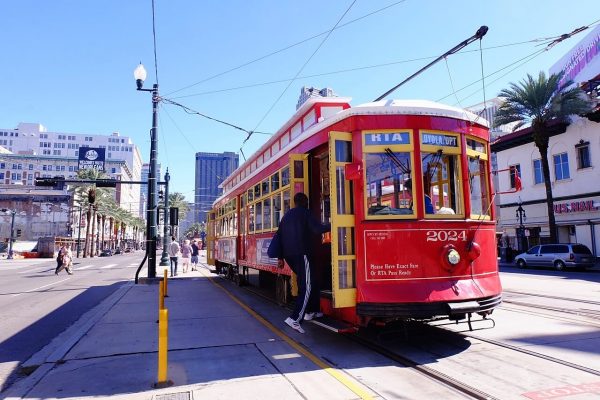 10 Essential Things to Do in New Orleans For Solo Travelers 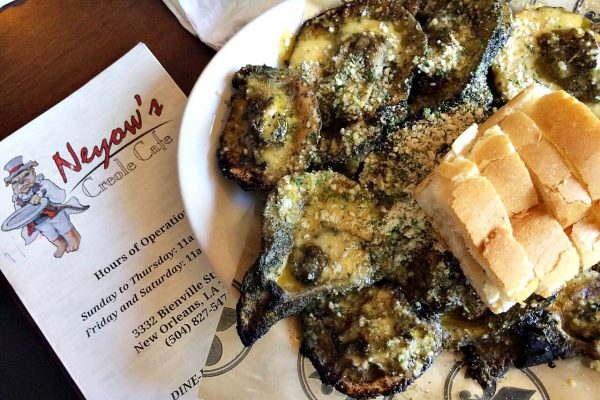 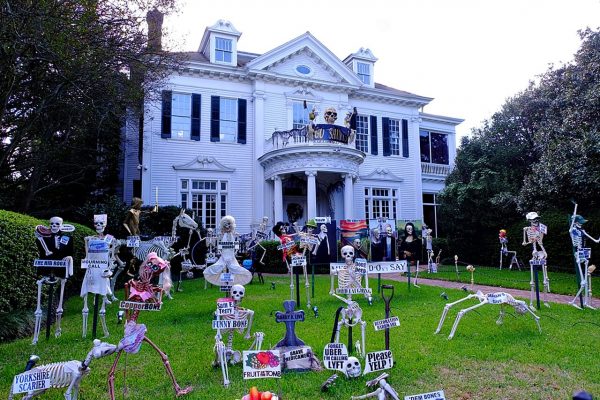 These images are awesome Aleah. Fascinating slave history too, because even though it is sobering and quite horrible, I never knew slaves in the NO had as many rights as they did. At least for a while. I do plan to visit this area and would want to see a plantation too. I visited Magnolia Gardens plantation in South Carolina some 30 years ago as a kid with my fam. Interesting experience there too. Super duper post, as always.

When I go back, I’ll go to the other plantations. There are so many there with different histories!

So true. Each one has a different story!

Bucket list. I have always wanted to see the plantations and the antebellum houses.

I love their architecture and would really love to live there. haha