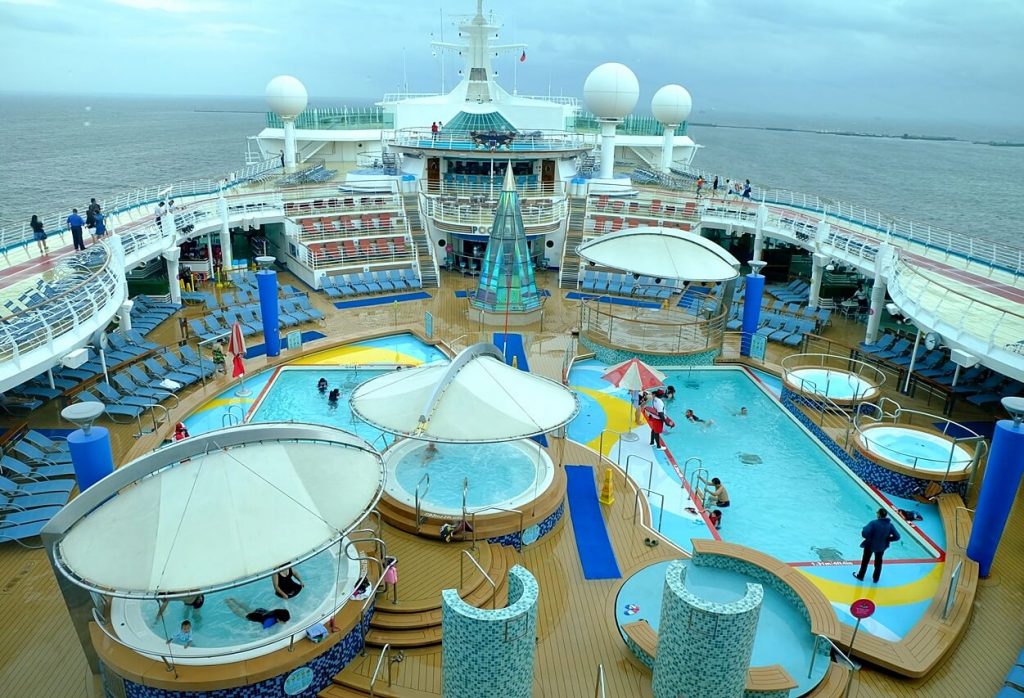 Royal Caribbean: Touring the Voyager of the Seas

Prior to embarking on a tour of the Voyager of the Seas, one of the 25 ships of the Royal Caribbean International, I had never been a fan of cruise ships. What would I do there? I thought. I was seriously convinced I would get bored!

If you’ve been on a cruise ship before, you would know how silly that thought was. There is no place for boredom in the Royal Caribbean; its ships are fully equipped and outfitted to provide entertainment round the clock. There are sports centers for the athletically inclined, shops for the shopaholic, bars and coffee shops, and even a video arcade. 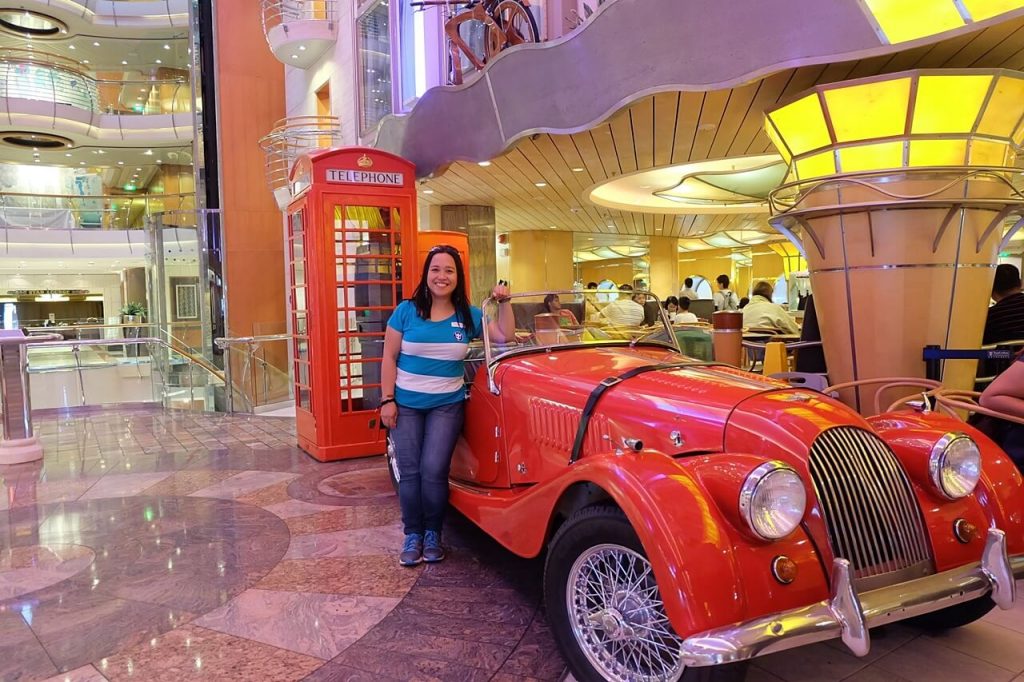 At the Royal Promenade, where the duty-free shops are.

The 15-decker Voyager of the Seas recently arrived on its maiden call in Manila with more than 3,600 guests on a 4-night cruise from Shenzhen, China. Its regular route usually takes it from Singapore to Malaysia,  China, Vietnam, Thailand, and Japan. It’s only from July to September that it goes from Schenzen to Manila and back.

The brief stop in Manila offered guests on Voyager of the Seas an opportunity to go on shore excursions to Laguna and the classic tour of  historic Intramuros. Its numerous Filipino crew (all bakers, for example, are Filipinos) also got a chance to invite their relatives onboard and see where they work. 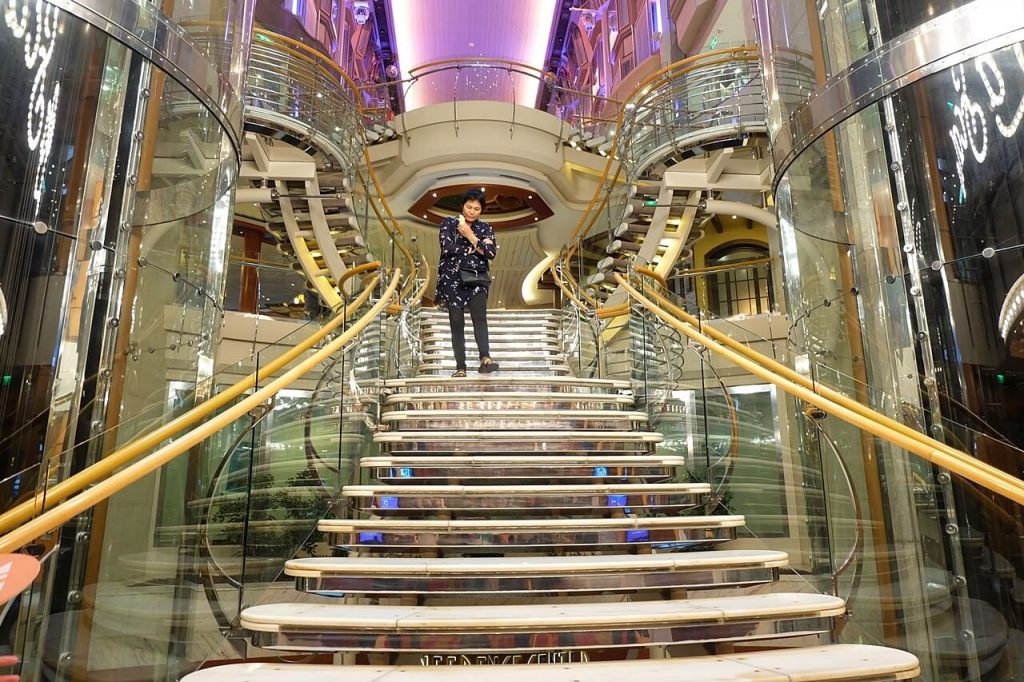 The highly-Instagrammable staircase going down to the La Scala theater.

This floating island resort is very family friendly. They have several amenities for kids and teens, including some swimming pools of varying depths and sizes, a basketball court, an ice skating rink, a rock climbing wall, a video arcade, and a Flowrider wave machine.

Adults will also enjoy the casino, the specialty bars and restaurants, the Royal Promenade shopping mall with its duty-free shops, a gym and jacuzzi, a spa, and several lounges for work or relaxation.

There’s a full theater with a 1,350 seating capacity where passengers can watch Broadway shows for free. There’s a conference room for those who want to hold their conferences on the ship, and yeah, there’s WiFi all throughout the ship (yay!). There’s even a chapel if someone wants to get married (!). 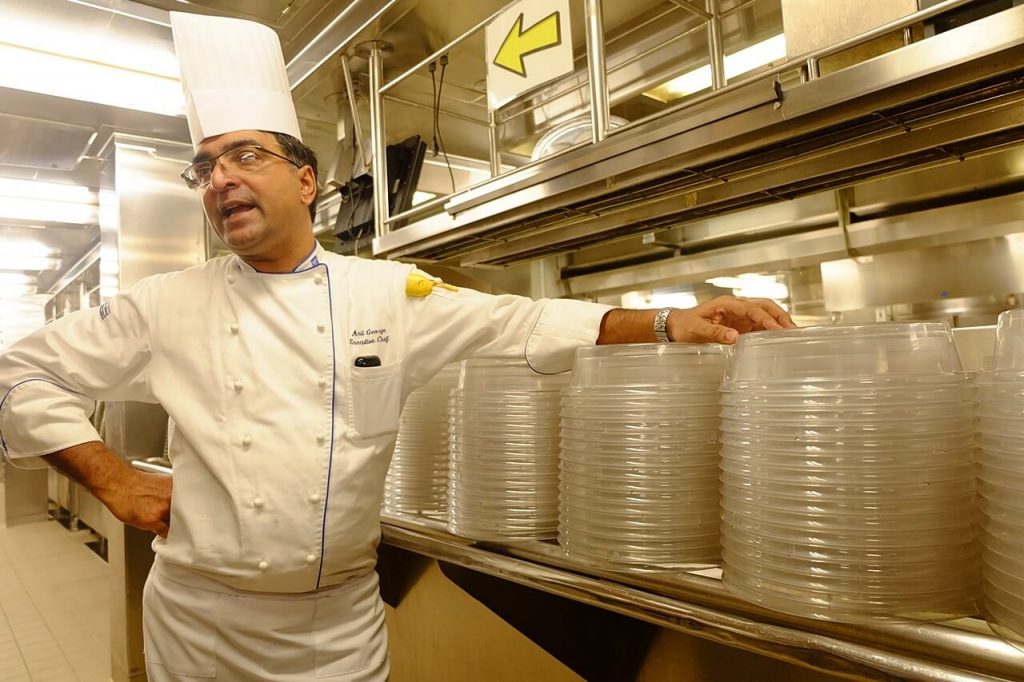 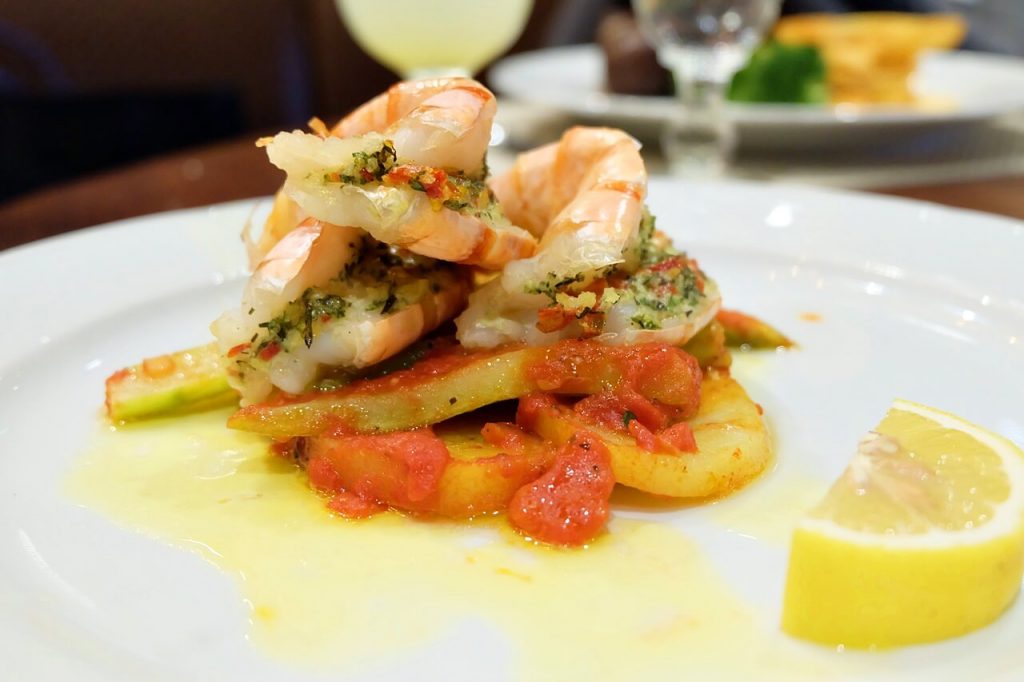 Given the huge number of guests and crew, it can be a challenge to serve meals on time. “We run it like clockwork, military-style,” says Executive Chef Anil George. “We serve 16,000 meals a day so all our kitchen staff have to be quick and efficient in what they do.”

George says that each kitchen crew has a specific job; the soup man only makes soup throughout the day (up to 200L), while the bakers focus on producing 18,000 rolls daily. There are several kitchens, too, like the mother kitchen (the main one) to the hot kitchen, cold kitchen, and pastry kitchen. 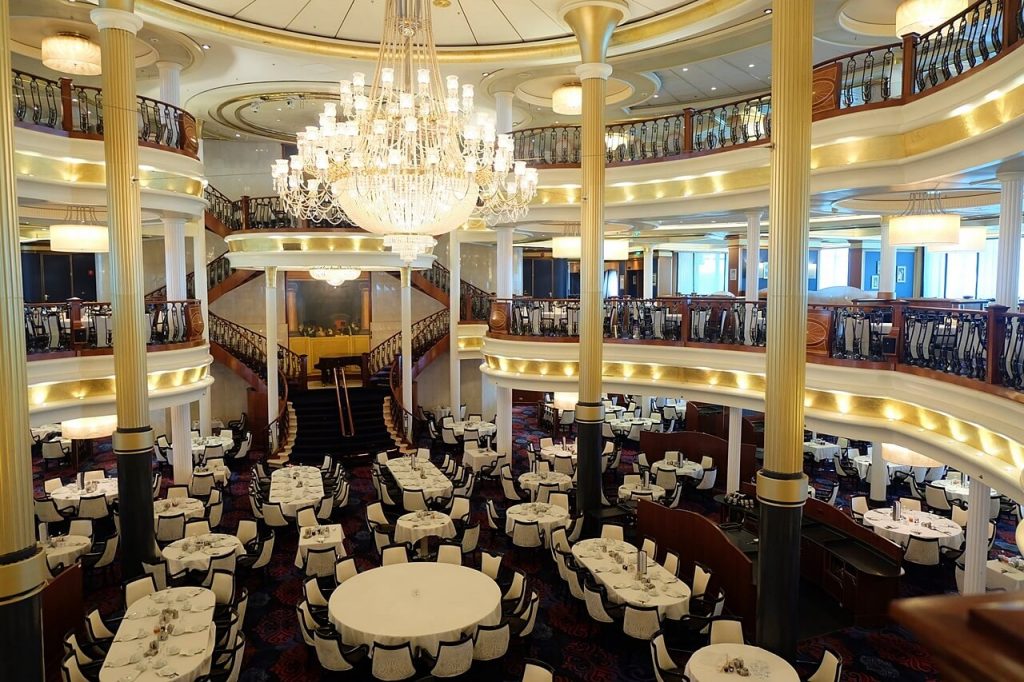 The Sapphire Dining Room, one of several dining areas, on Voyager of the Seas.

When it completes its Manila-Schenzen tour, the Voyager of the Seas will go on from Shenzhen to Okinawa; from Hong Kong to Kochi stopping at Okinawa, Kyoto, and Kobe; and from Hong Kong to Singapore via Nha Trang, Ho Chi Minh City, and Bangkok.

From September until June 2019, it will then embark on its longest season in Southeast Asia with over 70 trips from Singapore.

Have you been on a cruise ship before? How was your experience?

Aleah Taboclaon is a location independent writer, editor, and the travel blogger behind Solitary Wanderer. She's partial to slow travel, and prefers extreme adventures like hiking and caving over sightseeing. She likes running (completed one marathon, training for the next!), diving (PADI open water diver), and traveling with her Kindle. Follow her on Instagram and Pinterest!

I have yet to try out cruise ships since the nice ones are a bit pricey, and I’ve had a slightly irrational fear of going on one because I watched Titanic too young lol

Great tour, thank you.
I also like the fact that is a great value for groups. Be it family, wedding, company event and so on.
Each ship is like a moving resort. Live them for events.
Cheers !

Amazing. This is like a floating city Aleah. Inspired stuff. I have still yet to take a cruise but plan on one some day. Seems like way too much to do and experience not to cruise. Plus I don’t know of a more convenient way to travel. The food is right there and the ship takes you from location to location. Rocking post buddy.