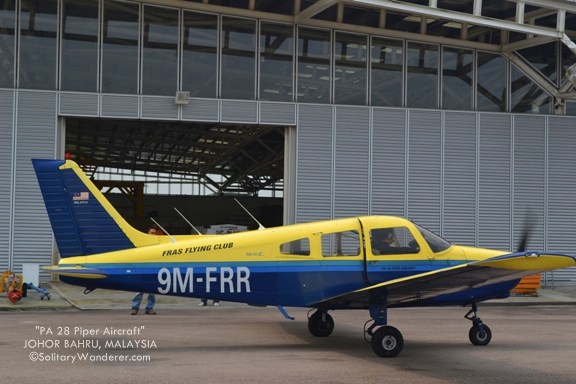 I Was a Pilot for One Day in Malaysia

Did you ever dream of becoming a pilot? I did.

I wanted to learn to fly a plane and be friendly with the clouds. I wanted to be up there in the sky, looking down into the earth below, so far away from everything and everyone. But flying is expensive, so I never got around to having lessons. Until recently, that is.

It was a foggy day when I let myself out that September morning from my cousins’ place in Woodlands, Singapore. I was to meet Derrick, the young Singaporean guy paying for my flying lessons, in Queen Street bus terminal where we would take a cab to Senai Airport in Johor Bahru, Malaysia.

I remember being very stressed at that time. I left the apartment early and would have arrived on time at the bus station if not for a guy who kept on following me from the Woodlands station. In wanting to lose him, I’d inadvertently taken the train going to Pasir Ris instead of towards Bugis. 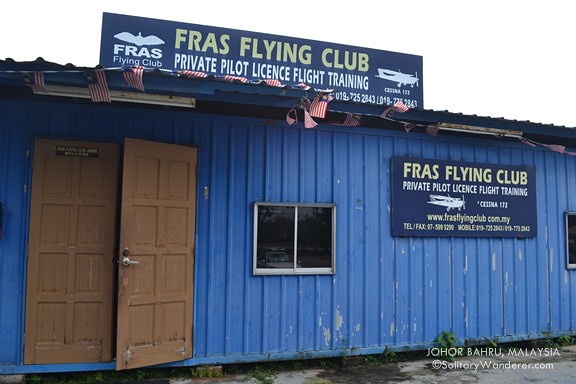 The office of the Fly Right Air Sport Club in Johor Bahru, Malaysia.

In any case, visibility was still poor so when we arrived at the FRAS  Flying Club inside Senai Airport, we still had to wait for a while for the weather to clear.

In the meantime, Captain Ingo Noka, the co-owner of Asia Pacific Leisure Flying holding the Pilot for a Day tour, told us a bit about the airport and what would happen during the flight.

When the Piper Warrior aircraft was ready, he went through the pre-flight checks, showing us what pilots do before boarding the plane. 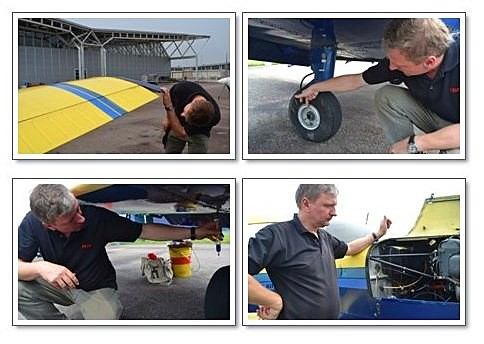 Everything must be checked; from the flaps (that there are no loose parts), to the wheels, fuel (to make sure there’s no water), engine, and propeller, among others.

Capt. Ingo didn’t have an instructor’s license (yet), so he turned us over to Capt. Boo Jing You, another FRAS member who just came back from a teaching session. 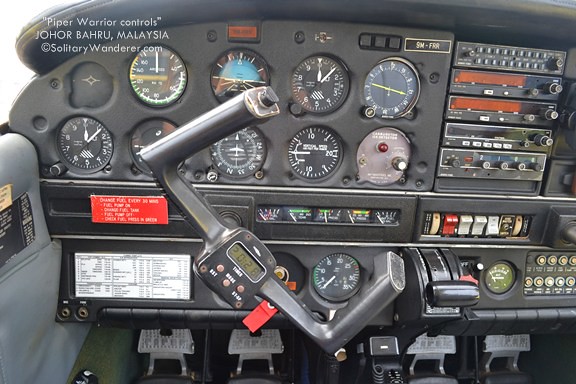 The instrument panel of a Piper Warrior aircraft.

Capt. Boo showed me how to interpret the various thingamajig in the instrument panel.

There’s one telling you how level the plane is, another showing how far you’re up from the ground, a compass, a GPS, an ice detector (umm…not used much), and air speed. Like what Capt. Ingo did from the outside, he also went through a checklist to make sure everything was working the way it was supposed to. 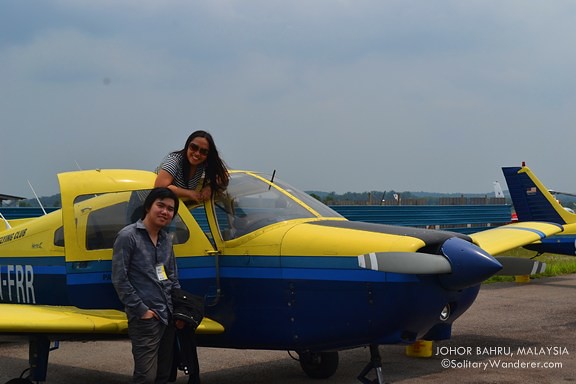 Together with Derrick on “our” Piper Warrior plane.

After getting clearance from the air traffic control, up we went! I couldn’t sit still, I was so excited to be in the pilot seat, although of course, I did nothing but take pictures.

I could hear Capt. Boo through the headset talking to the air controllers, and I couldn’t believe I was such in a small plane.

The Piper Warrior PA-28 is a light aircraft that’s really designed for flight training and personal use, and if it’s not used for the Pilot for One Day program, it’s used by students racking up hours to go towards either their licensure as a pilot or as an instructor. 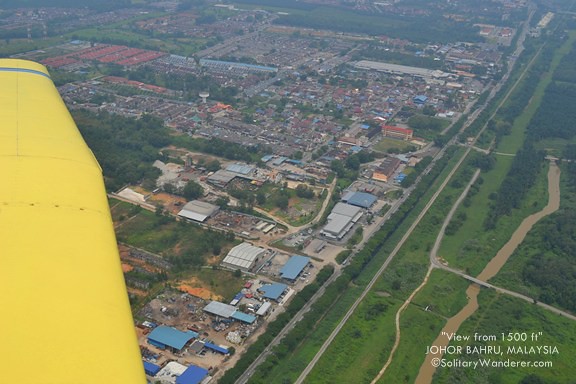 A view of Johor Bahru, Malaysia 1500 ft from the ground.

The Piper seats four people, and I looked back every now and then at Derrick, who seemed relaxed and unworried even when Capt. Boo turned over the controls to me at 1,500 ft.

I never knew planes can be so responsive! When I turned the yoke a bit to the right, the plane turned right immediately. I turned left, up, down, and generally, had so much fun acting as a pilot for a few minutes high up in the Johor Bahru airspace. 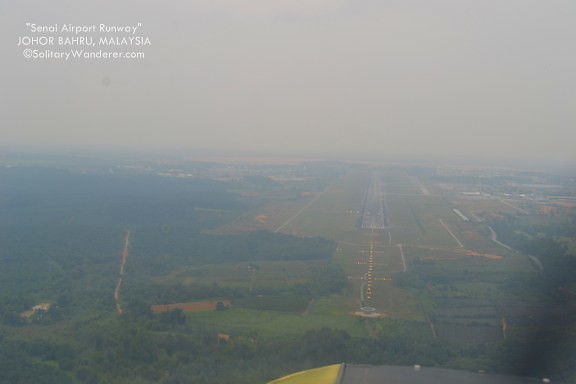 The runway of the Senai airport coming up!

Alas, all good things must end, so after 40 minutes, Capt. Boo turned us back to Senai Airport. I could see the runway come up, and no matter how much I asked, Capt. Boo wouldn’t let me land the plane (boooo). It was a good thing anyhow, as our landing was smooth and we arrived in one piece.

Despite this minor disappointment (as if), it was definitely the experience of a lifetime for me! Even though I wouldn’t be able to do it again (for one hour, it costs US$320 and I don’t have many friends as loaded and as generous as Derrick), I’m more than happy I got to do it at all.

Next time I find some cheap tickets to Singapore, I’d surely be back, flying lessons or not. My next flying bucket list? Fly in a T6 Warbird! I don’t know where or how, but someday, I’ll do it. 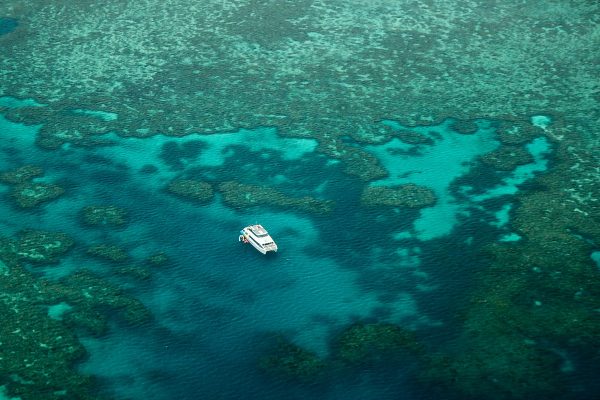 […] “Two years ago, when I went to Singapore, one of my blog readers took me out on a treat: to be a pilot for one day in neighboring Johor Bahru, Malaysia. The flight lasted only 45 minutes but I had the time of my life learning how to manipulate that little plane. The view here was taken from 1,500 ft up in the Johor Bahru airspace” – Aleah of Solitary Wanderer. […]

I’m sooooo glad you were able to experience this, Aleah! Isn’t it the most incredible feeling of freedom? My dad was a private pilot and taught me how to fly so I totally get it, my friend! Very, very happy for you 🙂

[…] had initially said no; flights are usually expensive. I remember being pilot for a day in Malaysia, and my friend who paid for it spent $400 for just 45 minutes of flying […]

Hi there! I came across your blog and found this post really interesting. How much is the fee to fly a plane? 🙂

As if!haha. And, its a good thing that you really weren’t asked to land that plane.:) What an experience for you!

[…] I Was a Pilot for One Day in Malaysia. While backpacking solo in Europe is one item in my bucket list that I’ve successfully ticked off (though it will always remain in that list!), flying a plane is also another item. With the generosity of a Singaporean friend I met through my blog, I was able to fulfill this wish. If you're new here, you may want to subscribe to my RSS feed. Thanks for visiting! […]

@ Terrence: Sorry, without Derrick I can’t afford it 😀
@ Effie: There’s no requirement. Just go to the website of Asia Pacific Leisure Flying and set an appointment. If you’re in SG, the owner will meet up with you and go with you to Senai.

Hi Aleah,
How did your friend Derrick arranged all that? I meant, is there any requirements?
Am very interested..
Effie

Hi Aleah,
If you wish to continue your flight training on a similar piper warrior ii (9m-tnc) based out of Subang , it costs less than SGD550 per hr ( in fact only RM650 per hr with an instructor ) . D drop me an email if you are keen. You will be taught by a very experienced MAS pilot with over 25,000 flying hrs experience.

@ Michele: Yeah, it was great! Too bad it’s too expensive 🙁

So cool!! That must have been a great experience. I’m headed off to Singapore next weekend, but no piloting for me.

@ Marisol: It was a once-in-a-lifetime experience, and the same thing can be said of my friend. Who else would pay that much for someone you just met, right? But he’s really nice. 🙂
@ Jan Ashlee: Yeah, this is a definite entry in anyone’s bucket list. Am so lucky to have done it already!

Keep blogging and continue what you do best!

OMG, you’re so brave, girl!! Good for you! Sounds like a thrilling experience. I love to travel and to fly but I don’t think I have a courage to pilot a plane myself, even for few short minutes! And by the way, you’re so lucky to have such a generous friend.

@ Andrew: Brave? Not really. I was excited to do it hehe
@ Sharon: The flight cost S$400 for me and S$150 for Derrick. Kinda expensive huh, for less than 1 hour? Anyway, he’s definitely not a stalker. He’s a very nice young man 😀

Naks naman Aleah! Congrats!
How much is 40 minute flight? You got to take over controls for like 5 mins?
Grabe naman, dyan ka pa nagkaroon ng stalker.

I think you were very brave, Aleah! Nice post…

@ Red: It’s definitely a buzz, an experience I will never forget!
@ Candleboxcindy: Yup, thanks 🙂
@ Flo: Thanks, sent you a PM!

wow! how cool is that!

Oh, well done! I’m still getting over being a passenger in a small plane – let alone the pilot! But what a buzz!!

@ Micamyx: I’m glad nagawa ko to before ako naging lola hehe You should try it once, it’s just like playing a video game!
@ Christine: Yup, we went through all those things. But the lesson was given when we were already in the air! You can’t go wrong with holding the yoke unless you get trigger happy haha

Wow, this guy paid for your flight lessons and that was it? That’s darned lucky. Were the flight lessons good and did it take long to learn before they put you in the air? Did the go through takeoffs and touchdowns and stuff?

@ Wilfred: Yeah, I’m so glad I got to do it!
@ Sky: It’s actually very liberating haha

this is way cool! definitely on my bucketlist! 🙂

@ Ed: Yeah it was really exciting, and something that I’m happy to do at least once. It’s too expensive haha
@ My Millado: It was, thanks!

wow, that’s an exciting experience aleah! congrats! i have a little fear of planes (strange for this travel blogger noh?) and you driving one is surely an amazing experience! ayos na ayos! 🙂