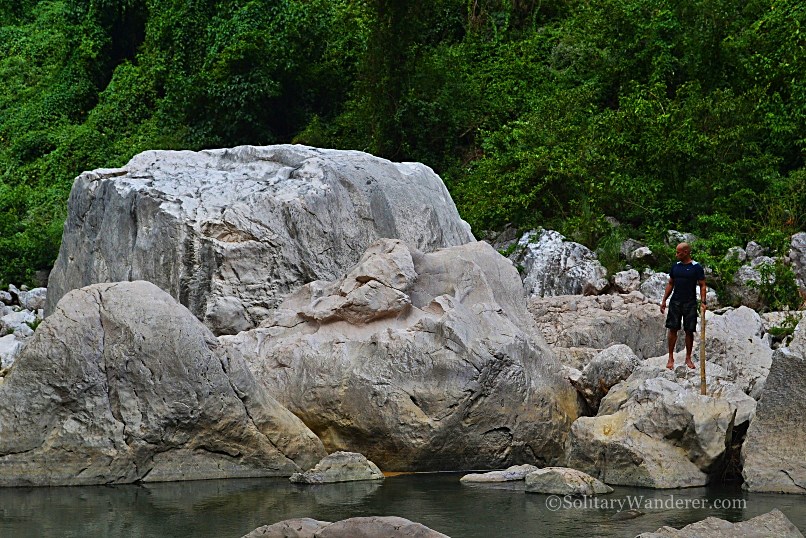 Want to escape the summer heat?

If you live in Metro Manila, there’s one place you can go to for a perfect day trip this season: Wawa Dam in Montalban, Rizal, which is just an hour from Quezon City and two hours from Manila.

You can go swimming there, rafting, trekking, biking, and yes, for the more adventurous, you can even go caving.

Wawa has a number of cave and cave-like formations. In the Second World War, its caves were even used by Filipino revolutionaries as a hideout.

There are a few open caves for spelunking, and two of the most interesting ones are the Bat Cave and Pamitinan Cave, which I explored with the help of  guide Marc Gana.

Going Deep into the Bat Cave in Wawa Dam

From our meet-up point in Aling Norma’s eatery across the Wawa Barangay Hall, we crossed the hanging bridge and hiked around 20 minutes uphill to go into the entrance of the Bat Cave, so named because–you guessed it!–it has so many of those nocturnal creatures inside. 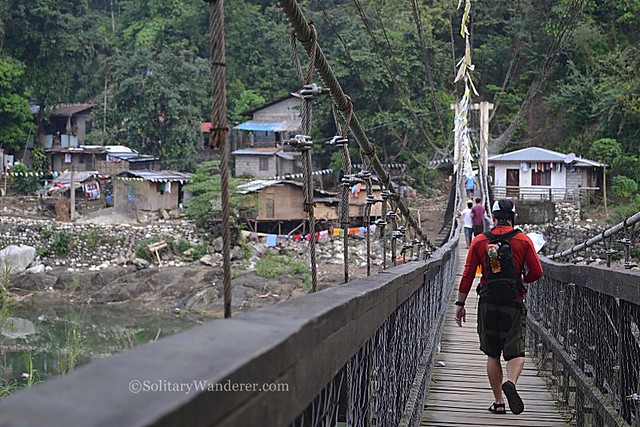 The moment we entered the huge entrance (reminiscent of the Bat Cave in Biak-na-Bato, Bulacan), we could see (and smell) ample evidence of the bats’ presence. We had to be very careful in walking, because the ground and the walls were littered with all kinds of creatures, from ants and spiders, to (yuck!) hundreds of cockroaches who all feed on the bat guano.

While Bat Cave didn’t have a lot of the spectacular rock formations I’ve seen in Sumaging (Sagada), Cantabon Cave (Siquijor), or Danakit Cave (Tandag, Surigao del Sur), it does have its share of interesting features. There’s a teeth-like rock formation, some nice stalactites, bat bones, and two human skeletons. 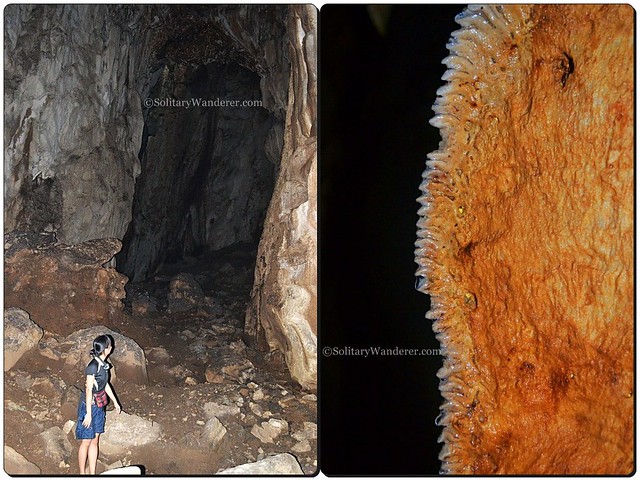 Entrance to the Bat Cave and some teeth-like formation inside. 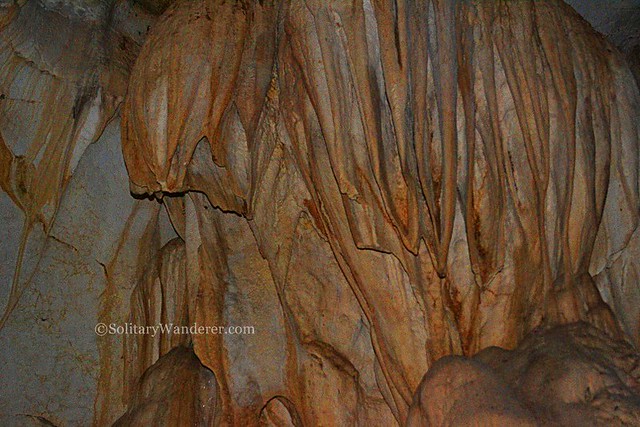 Lovely stalactites inside the Bat Cave. 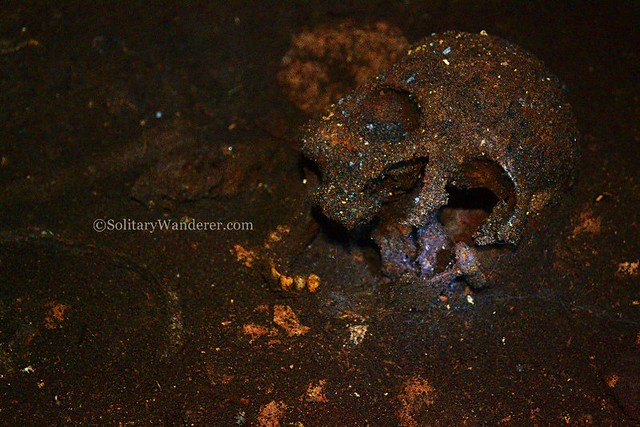 The skull of an unidentified human inside the cave.

Yes, in one of the chambers of the Bat Cave are two adult human skeletons, their bone fragments almost complete. They were placed just a few meters apart, and according to the guide, why they were there or who they were remain a mystery.

Were they lovers who killed themselves, or is it a case of murder? Nobody knows, but until now their bones remain there as a reminder of how fragile our lives can be.

Immersion in Local History Inside the Pamitinan Cave

After lunch, we proceeded into the Pamitinan Cave by crossing the Wawa River. I loved it! The water was deep and cool and the current moderate. My Nikon D3100 got wet though, and I had to buy a new lens. *sad*

Lesson learned: when you do a river crossing, make sure that you tie your dry sack carefully. Even better, bring a waterproof or underwater camera with you! 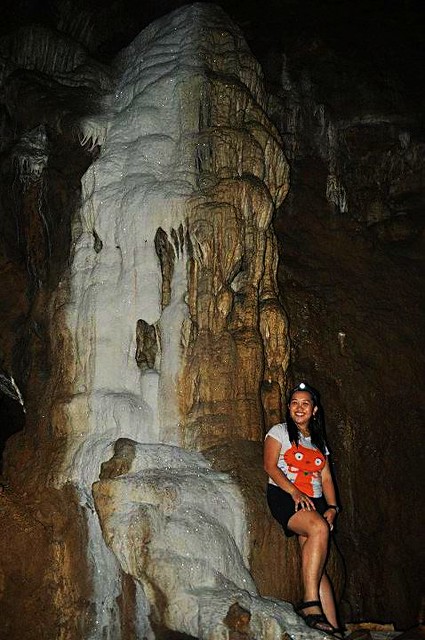 In any case, the Pamitinan Cave is huge. According to literature, it was the birthplace of the Katipunan, the place where the Filipino revolutionaries, led by Andres Bonifacio, uttered their first cry of freedom in 1895.

Standing in the dark (my Petzl’s batteries needed to be replaced), I could almost feel the courage of those eight Filipinos who braved all for their country’s independence.

Somewhere inside is the inscription Viva la Independencia Filipinas and there’s also a marker just outside the cave, in both English and Japanese, saying: Give them eternal rest, O Lord, and let them share your glory.

There were quite a few people in the cave when we went there; not tourists though, but surveyors for some reason or other. We easily passed by them and followed the long passageway (which could accommodate a train!) which was criss-crossed with plastic pipes bringing fresh water to the residents of Barangay Wawa. 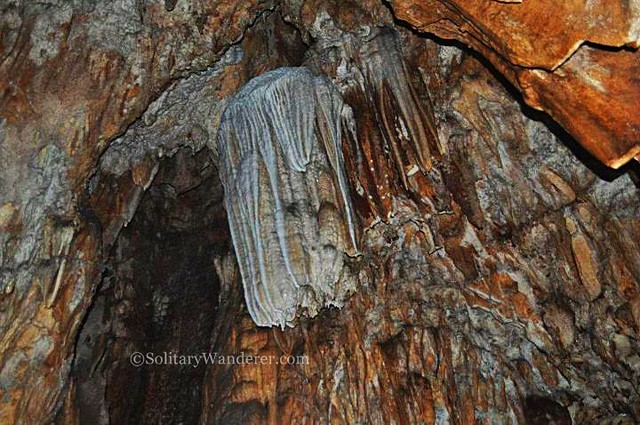 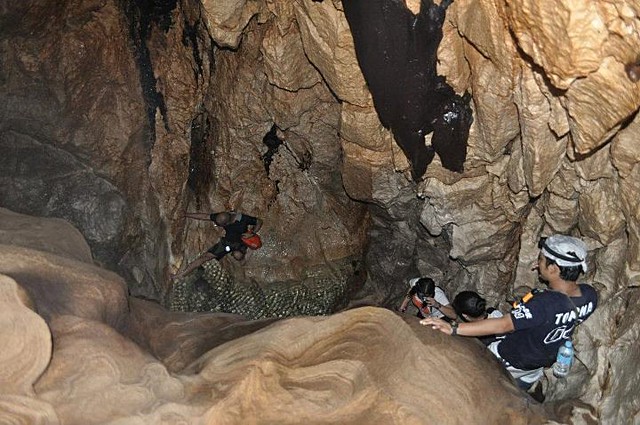 Even though we didn’t explore as many chambers, Pamitinan has a more enjoyable feature: it has a very cold pool with very clear waters which can be reached only by crawling and stretching your legs. I was already quite cold from our river trekking so I opted not to take a dip.

When we went back to the river, we saw the raft of the the surveyors, with a local man “captaining” it. He was generous and kindly, and offered to take us across the river for free. 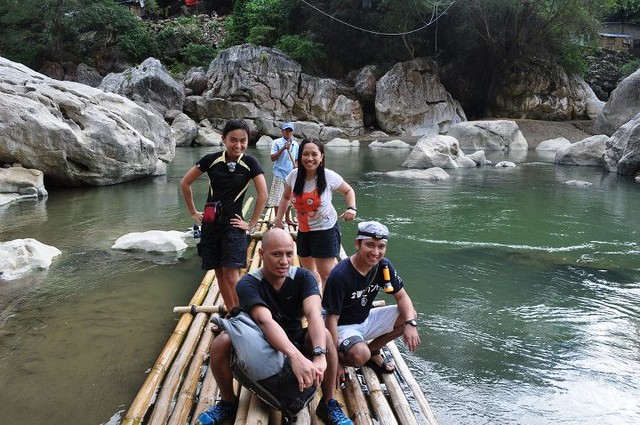 Rafting to the other side of the Wawa River. ©Andrew Tarnate

We were all wet, tired, and very sleepy from having spent a full day of excitement in Wawa Dam. However, there was only one thing in our minds when we were on our way home: we will definitely go back caving in Montalban again.

How to go to Wawa Dam, Montalban

From Cubao, Quezon City, take the FX vans bound for Eastwood parked in front of either Tropical Hut or in front of Jollibee, in Farmer’s along EDSA. One way costs P50 each. Once in Eastwood, take the jeepney bound for Wawa or Yagit for only P8. 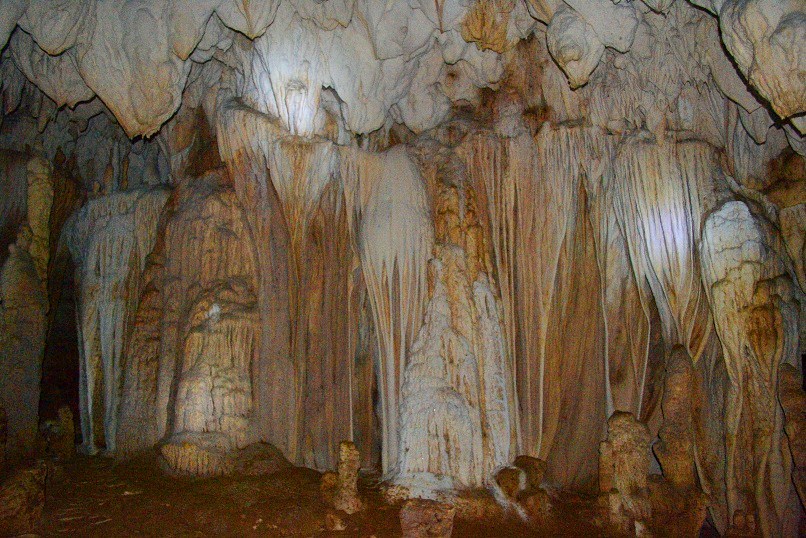 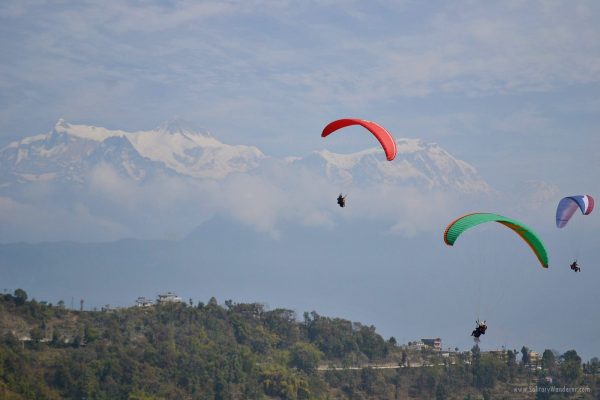 Riding the Wind in Nepal—Paragliding in Pokhara

@ Jhudy: You can go Next time with friends. 🙂

@ Nikki: Will do a post later on rock climbing in Wawa Dam 🙂 Don’t forget to check out my other posts on Montalban!

Cool! I didn’t know they had caves there. There are also a lot of rock climbing spots in Wawa, you might want to check that out next time.=)

And there’s another way of going there. You can take any bus/jeep that goes to SM Fairview, get down at Litex, then there’s a jeepney terminal there that’s Montalban bound. Get down at this 2 lane road they call “high way”, and from there, you can take a tricycle or jeepney going to wawa. It takes only 45 minutes to an hour from philcoa. =)

@ Turista Project: Scary ba? hehe
@ Killerfillers: Yeah, it’s so near!
@ cmichaelsny: Thanks for dropping by my blog 🙂

It looks like good to see this place..Thanks for sharing with us..

@ Justin: Sure!
@ Helen: Yeah, getting into a cave can be scary at first. Everything’s so dark and there are a lot of creatures there. But once you get over it, you’ll really like it!
@ Gay: Nope, they cancelled that. I went with another adventure group, the TEAZone. Wawa’s caves are not as spectacular as the others I’ve seen so far, but at least it’s very near.

Is this the Couchsurfing thingy or separate trip? Bet ko yang spelunking! Sana makasabay ako with some group.

I never tried getting inside a cave before. I remembered being forced to join the adventure yet my wild imagination just prevented me from pushing through. Come to think of it, the insides o the cave is not as scary as I have imagined. It is actually very beautiful and fascinating. I would not miss the chance next time.

Wow these place was great.Gonna visit there and have some adventurous travel.

@ Riz: Yup, it’s near enough Manila 🙂
@ Josiah: You can do a lot in Wawa. Next time I may try rock climbing!

Wow! I’ve been to Wawa Dam twice pero hindi pa ako nakapag-caving dun. Salamat Aleah for sharing the information on how to get there. 🙂

The cave looks nice. I’ve been looking for a weekend getaway na malapit lng. This post sounds perfect! 🙂 THanks!

@ Janet: Yeah, been planning for some time to write about Avilon Zoo. Will do that one of these days 🙂
@ Monisima: A lot of people want to know where (and how) they can escape the summer heat! And caving is perfect for that, together with swimming in Wawa. 🙂

i appreciate the way you gave details on how to get there. It makes me really feel it is possible, and I just might go. Thanks, too, for the tips on the guides.

hi, looks interesting. where in eastwood do you catch the
jeep going to wawa. salamat!

wow! sounds like a mysertious cave. i’m guessing you have a romantic side “Were they lovers?….” hehehe

@ Mitch: Yeah, its proximity to Manila make it the perfect day trip destination. There are so many things you can do there, and since there are a lot of trees, you’d surely escape the summer heat!

HUWOW! I didn’t know that there are such creatures and cave in Wawa, Rizal. These caves are within the area of Wawa Dam? Aside from beach, this is just perfect to those who wants to unwind. Very near sa Manila. Parang hindi msyado mainit unlike sa mga beaches natin sa province.

required ba yung guide or can anyone just go in aleah? 🙂