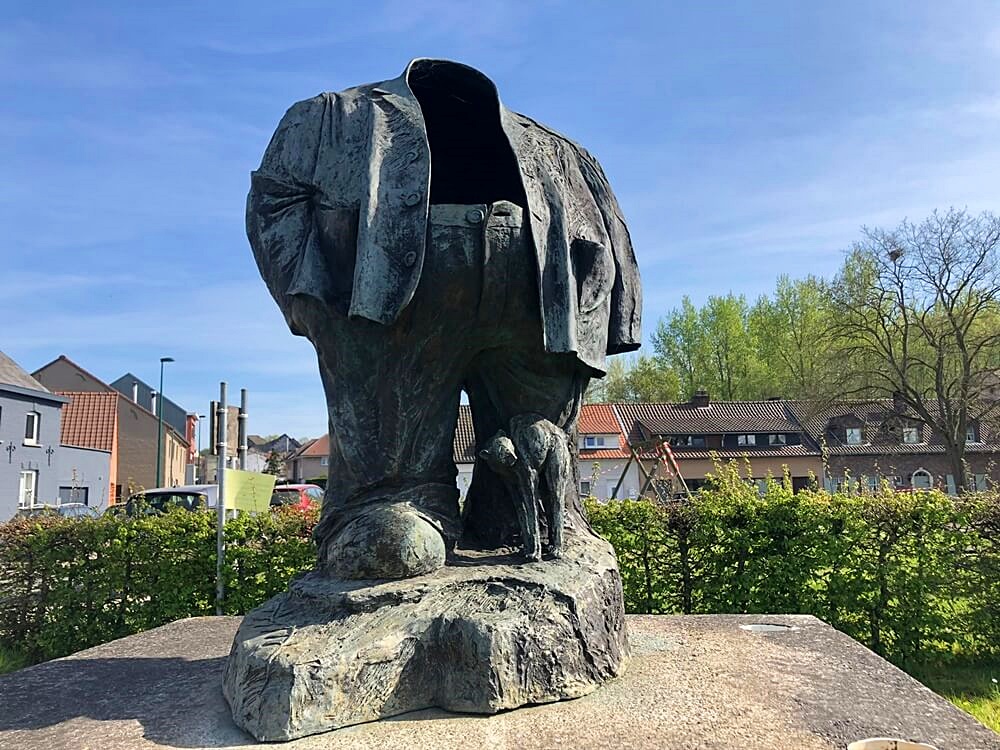 The Fat Man in Pamel, Belgium

What is Belgium famous for? You can probably guess — beers, chocolates, and waffle. Throw in some fries and mussels and you’re ready for a gastronomical experience. However, Belgium is also known for its quirky statues. There’s the well-known peeing kids — Manneken Pis and Jeanneke Pis — and “their” dog, Het Zinneke, in Brussels. In small towns and cities, you can also find statues with interesting stories, such as the three copper pots in Olen, the Lange Wapper (a giant trickster) in Antwerp, the lion on the mound in Waterloo, and the fat man in Pamel Belgium.

Located along the Dender River, Pamel is a small village in Flanders. It is part of the Municipality of Roosdaal with a population of around 5,000. Its history dates back to the 1700s, but what it is known for nowadays is the statue of a fat man’s suit by the riverbank.

De Dikke was said to be quite famous in his time for his size. He started gaining a lot of weight when he was four, so much so that he could not sit at a regular school desk in his elementary years. By age 11, he weighed over 100 kilos (220+ lbs) and gained the nickname De Dikke (the fat one) by then.

Despite his size, De Dikke was described as having a fresh and healthy appearance, tall as an oak, with blue eyes and a beard like Santa Claus. Through the years, he just kept on growing, and he found manual labor harder and harder to do. He would just stay in his basement, or swim and float on the Dender River. When he was feeling good, he would allow boys to sit on his stomach while he was floating.

His fame (or notoriety?) spread, so much so that people from other villages and cities would go to Pamel to take a look at him, especially on Sundays when he would go to church. From far and wide, regular people, traders, and even nobles would line the road in Pamel, wanting to see De Dikke go to church.

His reputation even reached Paris. A ringmaster went to Pamel and asked him (through a local, because De Dikke would no longer tolerate strangers) if he would agree to be exhibited as the largest man in the world for a very good price of 100,000 francs. Needless to say, he said no.

This became too much for him and he started staying at home, barricading his door so strangers couldn’t get in.

In his 30s, De Dikke lost his freshness of youth. He grew heavier and heavier until he was found in bed, dead, in 1885.

Back in the days, when you died, your neighbors would carry your coffin from your house to the church, and from the church to the cemetery. It didn’t happen with De Dikke; no number of neighbors could bear his weight.

He was buried in a corner of the cemetery closest to the river that he loved so much when he was alive. After a few years, a giant willow tree grew from his grave, a mystery to villagers who swore up and down that they didn’t plant anything.

In 2001, more than a century after the death of Victor De Klerck, aka Dikke van Pamel, the city council commemorated his death with a statue overlooking the Dender River.

The artist, Patrick van Craenenbroeck from Teralfene, purposefully built a suit without Victor’s body, to let viewers fill it in with their imagination. Van Craenenbroeck also put De Dikke’s beloved cat by his feet, his only constant companion.

When you come visit Pamel, do head to the Dender and see the statue that represents De Dikke, the Fat Man of Pamel who was once called the biggest and heaviest man in the world.

New sub here I found your vlog very interesting and the amazing criss – crossing around the planet, interesting travel stories and lovely pictures and the people you have met during your travels.
How are you able to move around during the pandemic period ?.

@Photo Cache: It is stressful though, as I don’t know when the results of my visa extension will be released. But it’s better to be quarantined here than in other countries with stricter policies.

I’m following your quarantine story on facebook and IG and I’m getting a great perspective on how to be quarantined outside of your own home and country. You are doing it right I suppose.

Europe is full of quirky and whimsical (and incredible) sculptures that add to the enjoyment of the cities.