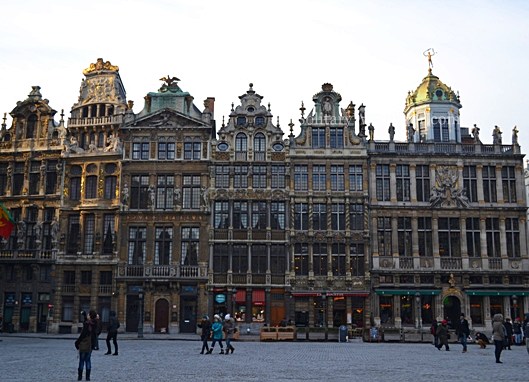 When I think back on my first arrival in Belgium, all I could remember was the cold.

It was at least -10 deg Celsius, probably not a biggie if you were used to freezing temperature, but when I left the Philippines, the temperature was around 30 degrees. To say I had a bit of a shock is an understatement.

Despite the misery, I did manage to go around. A friend who’s based in Mollem-Asse took me to Brussels, and given the temperature, we decided on one destination only: the UNESCO World Heritage Site Grote Markt (“Grand Place”), Brussels’ historic and beautiful central square. 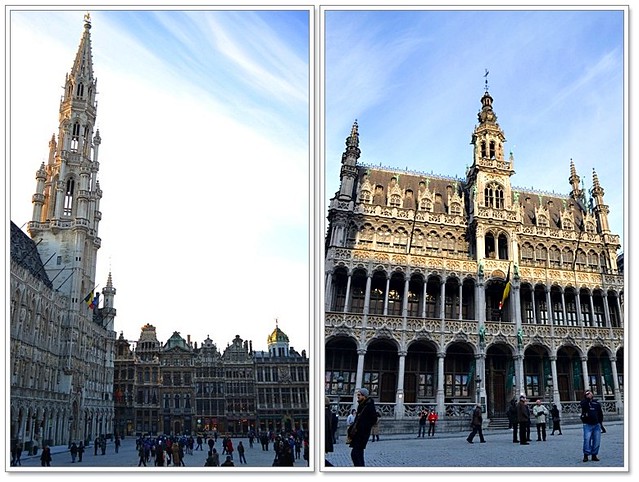 Brussels’s city hall dates back to the 15th century.

The Grand Place is a huge area with the city hall on one side and the King’s house and some guildhalls in another. There were quite a few outdoor cafés, and I can imagine how wonderful it would be during summer when you can sit outside and just people watch. It’s really great that for European city breaks, one could easily take the trains to get here from any point in Europe. 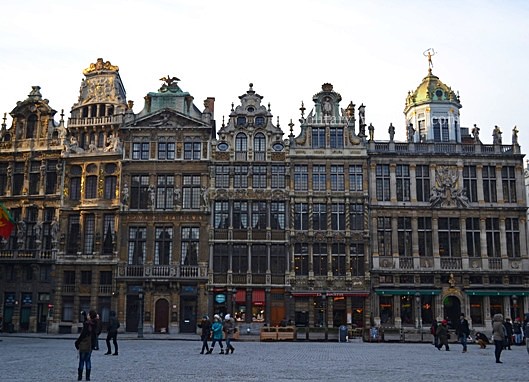 The guildhalls in the Grand Place, Brussels. 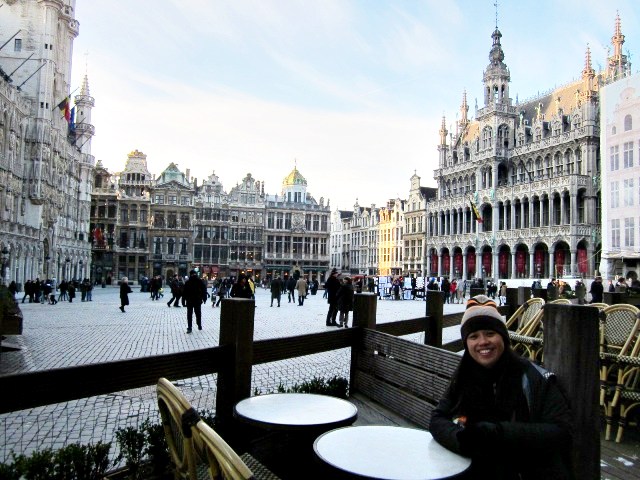 The (then) empty outdoor coffee shops in the market place. ©Hazel Ilano

There are actually a lot more to see in Brussels during winter. For those who are in the city, for example, from the last weekend in November to January 2nd, there is the glorious Christmas Market in the Grand Place stretching to Place St. Catherine which has a lot of really interesting items on sale.

You can find anything in the 240 chalets specifically put up for the occasion, from locally made candles and soaps to Christmas decorations, Russian dolls, jewelry, children’s toys, and a lot more. Known as “Winter Pleasures,” the highlight of the Christmas Market is the Electrabel light and laser show in the Grand Place.

The best time to go to the Grand Place in Brussels, however, is during the summer season. Sometime in August every two years, over a hundred volunteers create a giant, colorful flower carpet in the market square, a local tradition that attracts thousands of visitors. What I wouldn’t give to be able to go back there and see this work of art!

Despite the cold (we even had to go inside the Belgian Beer Museum at one point to get warm!) it was a very enjoyable day for me. There weren’t a lot of tourists, and I had a glimpse, however brief it might be, of how wonderful it must be to live in Europe where you have easy access to such beautiful and historic sites like this.

Have you ever been to Brussels? Where did you go aside from the Grand Place? 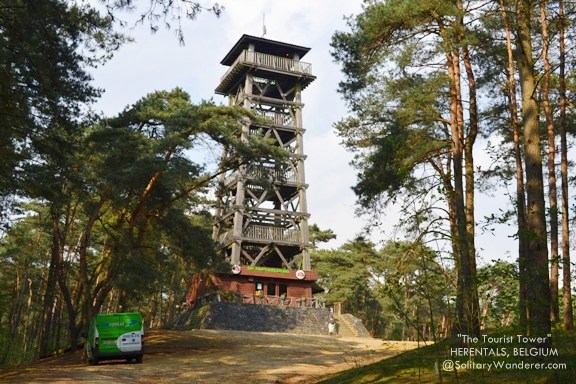 The Tourist Tower of Herentals, Belgium 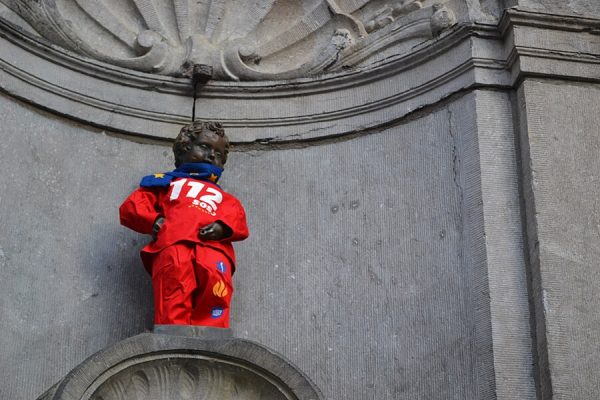 @ JC: I have a blog post coming up on that 🙂 Aside from saving (I didn’t spend so much), better also if you can form connections who can help you with the visa.

hi! i would just like to know how nuch did you spend on your 70-day European trip? i got so inspired by your experiences there…hope i can do the same thing. just wanna know how much i need to save up for this adventure. thanks. =)

@ Sabrina: I wish I can go back during the summer season too. It wasn’t freezing but it was REALLY cold because of the wind 🙁

Beautiful! But -10 Clesius? That’s freezing! Luckily at least it looks sunny in your pics. I bet that would be an amazing trip during summer when you can sit outside.

@ Cindy: Please feel free to use my posts, and to share it to your friends! Yeah, I really loved people watching in Brussels when it got a little warmer in April.
@ Marcia: I wouldn’t mind going to school (or work) in Brussels 😉 Yes, do add me in the relay! Thanks!

I nearly went to school in Brussels. What a beautiful city!!!

BTW, if you want, I can put your name in the ring for the Blogger Relay. Let me know.

So cool to see this, I was just in Brussels last week. Lucky for us though, it’s summer and it was very warm and sunny! The grand place was definitely the highlight of the day trip, but we also went to see little buddy manneken pis, the cathedral, galerie and we did the mandatory people-watching-while-having-beer at a la mort subite (sudden death)

Btw, love this site and I’m stealing your one day itinerary for Angkor wat – punta ako next week! 🙂

I was in the Netherlands and Belgium on a riverboat cruise but I did want to spend anymore euros on an optional stay in Brussels. Sayang!

@ Mary: We were about to go to the Atomium too but when we went back to the Grand Place from seeing Mannekin Pis and found out how cold it already was, we ditched that plan. Too bad, I would have wanted to see it!
@ Cathy: Bruges is wonderful! It was a tough choice indeed.

I’d like to see Brussels any time of year. I got close on a trip to Europe last year. I was headed there on a train from Rotterdam, but at the last minute changed trains in Antwerp and went to Bruges instead. Sadly, I only had time to visit one or the other!

We loved the Grand Place! We were there during Fall (early Oct.) and it was perfect weather. It looks really cold in your picture but at least it wasn’t snowing. I loved all those guild houses. My kids remember Mannekin Pis the most. We ended up at the Atomium and the St. Michael/st Gudula cathedral and walked around admiring the cartoon murals. We’d love to return to see the flower carpets someday.

@ Marisol: I would LOVE to go there during summer. Unfortunately, unlike you who’s based in Europe, I can’t just go anytime. It’s so hard to get a visa *cry*
@ Jan: Yeah, there was a flower festival I think two weeks ago. The next one’s in 2014. I really wish I can see it then!

Hi Aleah, -10 is hugely cold for me. I would not sit outside in that! I have seen another photo of that flower carpet recently, it would be wonderful to see that. Good on you for braving the outside coffee shop!

Aleah, poor you, I know how cold a cold can get especially if you’re not too used or prepared for it. But you seemed to be a trooper and madre the most of it. I love this part of Brussel. I was there during fall season. It was cold but not freezing. I love that every restaurants had outdoor heaters so people could still sit outside. And I loved the warm wine! I’d love to go back during the summer to see those carpet of flowers in the photo. Maybe we’ll bumped into each other there? 🙂

@ Escaping Abroad: Oh Belgium is just one of the fabulous countries you shouldn’t miss in Europe! There’s a whole lot more!
@ Ipha: Yup, those are real flowers! I didn’t get to see it as they only hold that festival every second August.
@ Alison: I guess I was lucky, eh, I arrived when it was unseasonably cold in Belgium? Looking forward to go back…someday!

Last winter was a cold one here in Brussels! I’m glad you enjoyed your stay despite the weather. It’s definitely a lot different in the summer but then you have to share Grand Place with many more tourists. The Flower Carpet was on just a few weeks ago and it was spectacular but very very busy. I hope you get to come back when it’s not so cold!

Wow! So kainggit! By the way, are those floral carpet real flowers?

The guildhalls look amazing. I love Europe’s old architecture.. can’t wait to see for myself some day 🙂

@ Gelo: Don’t be envious, because when I look back on my trip, *I* get envious. Why is it sooo hard for us to get a visa?? 🙁
@ Razlan: Yeah, we went to see Mannekin Pis and his “sister” Janneke Pis. They will be for another post 😉 Will send you an email, your blog got published in PAL’s Mabuhay Magazine!

I was at Brussels only last week! It was a warm summer day, the cafes were bustling and the flower carpet show was on! Will be doing a blog post on the place. Oh yes, there was a Belgian Beer Museum there, as well as the Manne-kein (pissing boy) which is nearby as well.

while the mere mortals in us are dying to work and save and dream to set foot on those lovely ground in belgium (and the rest of europe), you’ve been there done that. *envy. inspired. sigh.*

i hope i could bring my family there one day.

you’re blessed to experienced this grandiosity, aleah and i know you know it. 🙂

@ Fifileigh: Love the Belgian food! Special mention to the waffles, chocolates, mussel and fries, and their beer-flavored dishes. Yummy!
@ Jeff: You got it right! And you being a Westerner wouldn’t be fazed with the cold, would you? 🙂

Wow, you sure look cold in that outdoor cafe my friend. Your pictures are stunning and Brussels has certainly moved up a notch on my bucket list. I would love to visit during the Christmas markets most of all, I bet the square is transformed into an enchanting wonderland brimming with holiday ornaments, mulled wine and confectionery delights!

it looks nice. i want to go there someday. what is their food like or the activities in the area? how are the accommodations?