What would you do if you were told that if you touch a certain sculpture and make a wish, it would come true? You would touch the lucky sculptures, right, whether you believe in superstition or not? After all, it would cost you nothing, and—who knows—it could be true!

In my 70-day solo backpacking trip in Europe last year, I came across several of these statues. In some instances, nobody told me they were considered lucky sculptures; I knew anyway just by observing what the other people were doing.

Here are just a few of them I encountered in Europe. 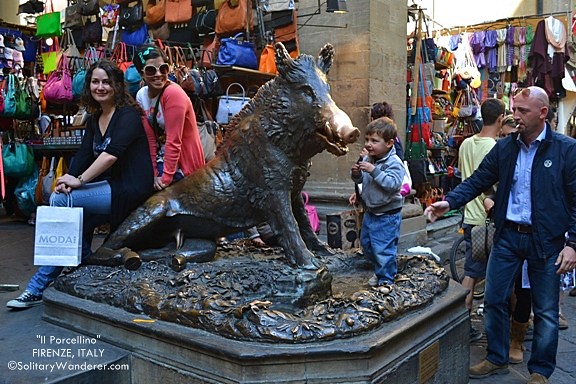 The lucky piglet in Florence.

Florence is an indescribably beautiful city that’s full of wonderful works of art. One of the popular ones is not inside the museum, though. It’s right outside near the Mercato Nuovo. Made by Baroque master Pietro Tacca in the 1600s, it’s called Il Porcellino (“the piglet”), a bronze sculpture of a boar sitting on its haunches.

To ensure your return to Firenze, rub his snout or throw a coin at his feet (or both)! 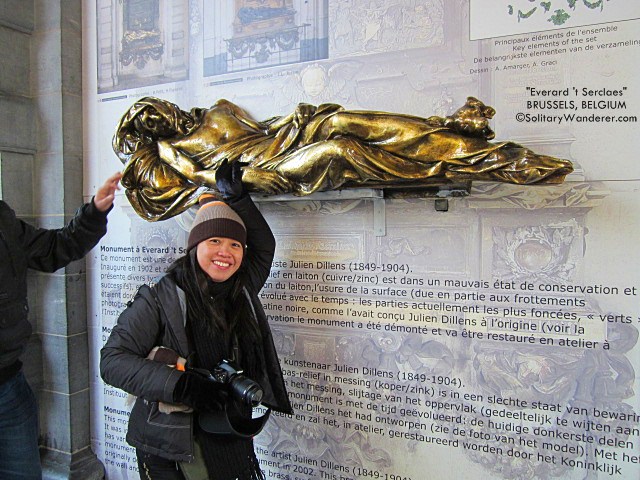 Do I look as if I was cold? I was freezing! © Hazel Ilano

I arrived in Belgium when it was still winter, and when my friend Hazel and I passed by this sculpture on our way to see Mannekin Pis, she told me specifically to touch it. She said that it would bring me luck and make my wish come true.

I was supposed to touch the dog, too (upper right) but I was so cold that I couldn’t wait to move on! 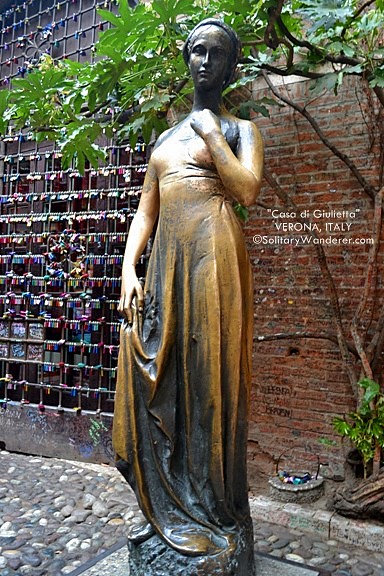 You must touch Juliet’s breast for good luck.

I spent a day in Verona, the city of Romeo and Juliet. One of the major attractions there is Juliet’s House, specifically the balcony and in the courtyard, the statue of Juliet.

It was already spring when I arrived, so there were hordes of tourists inside the courtyard. I saw them posing one by one with Juliet, making sure to (fondle) touch her breast first. I followed suit; who wouldn’t want good luck when it comes to love? 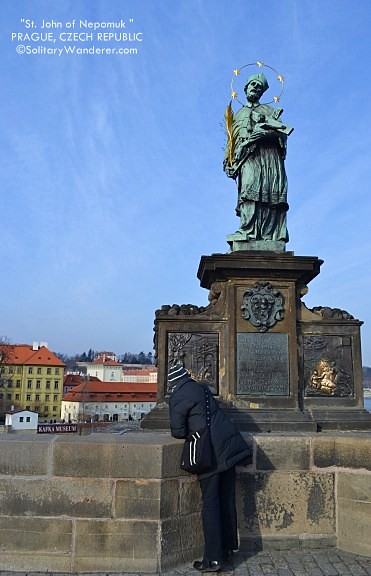 Make sure to touch both plaques!

One of the most popular attractions in Prague is the Charles Bridge, which is always full of people no matter the season. There are a lot of statues of saints on the bridge itself, and one of the most famous is the one of St. John of Nepomuk, the priest in the court of King Wenceslas IV.

According to history, St. John was thrown into the Vltava River from the bridge because he invited a fellow priest to Prague who turned out to be an enemy of the King. The two plaques at the base of his statue tell his story, and you will have good luck if you touch both of them. 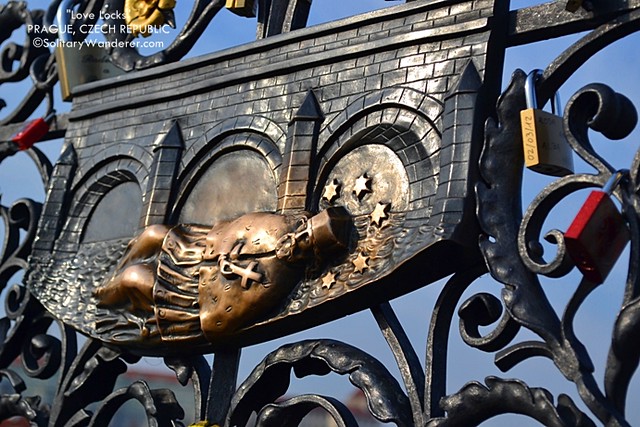 The martyr is shown being thrown into the river.

A few meters from the statue is a railing marking the exact spot where St. John was thrown off the bridge. It depicts him falling into the river, the five stars around his head appearing when he touched the water. Touch the stars as well as the cross on the bridge and your wish will come true! 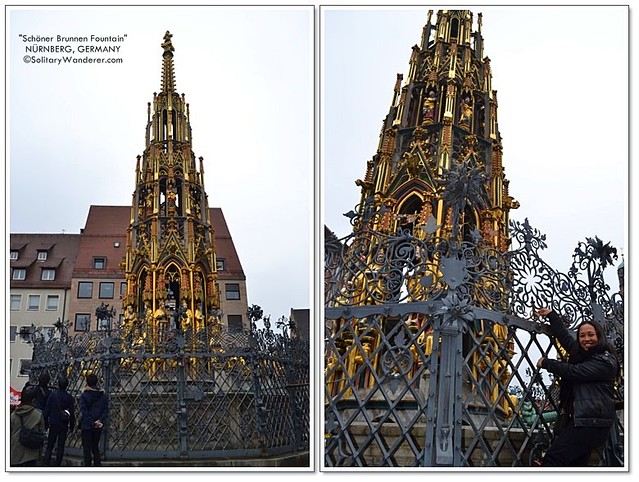 There’s nothing I wouldn’t do for luck.

In the beautiful marketplace of Nürnberg stands a 19-meter sculpture called the Schöner Brunnen (literally, “beautiful fountain”) surrounded by metal grilles. When my friends Saskia and Daniel took me there, we had to wait awhile to let the other tourists complete their business at the railings. 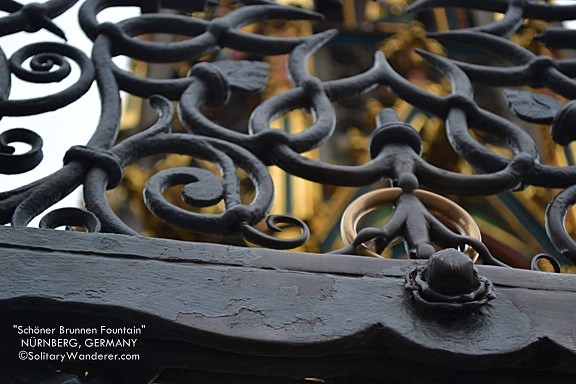 Make sure to turn the ring around 3 times!

I soon saw what they were doing; attached to the upper part of the railings is a small, golden ring. Legend has it that if you turn the rings three times, your wish would come true. Vertically challenged as I am, I had to climb up the railing and hang by one hand while making sure that I turned the ring properly!

The lovable musicians of Bremen.

Who hasn’t heard of the Brothers Grimm fairy tale, The Musicians of Bremen (“Die Bremer Stadtmusikanten” in German)? I was tickled pink when I realized that the place I’d only heard of as a kid was real after all. The same hour that I arrived in Bremen, I immediately set off to find the Gerhard Marcks sculpture depicting the donkey, dog, cat, and rooster in the story.

It is said that touching the statue (specifically the horse’s hooves and mouth) will bring good luck. Note how shiny they are compared to the rest of the sculpture? A lot of people must have been here!

I’m sure there are hundreds of other such sculptures scattered in Europe and all over the world. I have touched and rubbed the ones I have written about, but my wish is still yet to come true. Maybe someday, who knows?

The Best Places for Street Art in South America 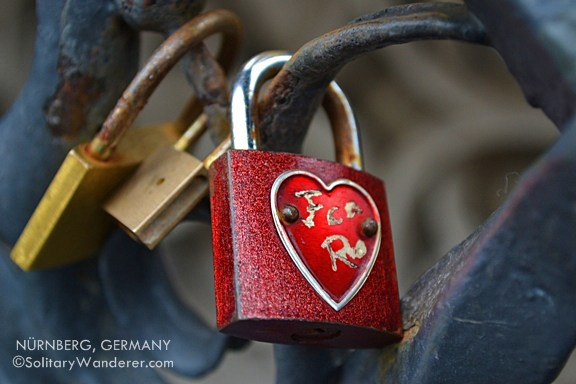 @ Stvolpina: Umm…I can’t imagine what the place looks like after hundreds have visited it! Yikes! 😀

hahha…on of the mist interesting such places for me was in Edinburgh, where you don’t touch anything, but instead you have to spit on the floor! It’s called the Heart of the Midlothian. check it out ! 😉

@ Inside Journeys: Yeah, who knows, right? Maybe the luck is indeed true 🙂
@ Dick Jordan: I’m racking my brain to find more themes like this 🙂

Good choice of a theme for this story and group of photos. I was lucky enough to touch St. John when I visited Prague in 2009.

What a fun theme! There’s a large bust of Chopin in Spain in the town of Valldemossa on Mallorca. Rubbing his nose is supposed to bring luck, and you can tell that his nose has been rubbed a lot.

Love how fascinated we all are about statues and luck. I’ve touched and rubbed several, for luck, in my travels. Like you, I can’t resist!

@ Lisa: I didn’t set out to find them. I guess I was just lucky enough to stumble onto them while I was going around 😀
@ Debbie: Awww I would have loved to see Goose Girl! Unfortunately I never go to go to Gottingen. Hope to have another opportunity to visit there someday.

I love running into statues while traveling! These are great. There is a statue of a little goose girl in Gottingen Germany (also on the Fairy Tale route) that some say is the most kissed statue in the world! Give her a kiss for good luck 🙂

I can’t believe how many lucky sculptures you found on your European trip – you should be lucky for years!! 😉 In the Eaton Centre in Toronto there used to be a large sculpture of Timothy Eaton who founded Eaton’s Department Store. People used to rub the toe of one of his boots for good luck and it was so much shinier than the rest of the sculpture. I know I have seen other lucky sculptures but none of them are coming to mind at the moment!

@ Jan: Yeah I would love to write similar themes like this 🙂
@ Leigh: LOL I’m not a believer, but who knows, right? So yeah, I will kiss, pat, fondle, and touch too! 😀

I’ll go out of my way if it might mean some luck comes my way. I’m a tad superstitious s I’d be kissing, patting , fondling and touching all of what you’ve shown me today. It’s a fun post to read.

I love the musicians of Bremen;the poor martyr;Juliet and the lucky piglet. I love it when these themes fall into place.

@ Marisol: Yep, I wish too! I only made one wish hahaha
@ Dennis: Machu Picchu remains in my bucket list. Hope you got your wish? 😀
@ Jan: Unfortunately, I haven’t seen or touched the Little Mermaid, although I did indeed go to Copenhagen. 🙁

Whoah! those are beautiful sculptures! you’re lucky to be able to see and touch them… I wish I can see them all too soon esp. the little mermaid in Denmark ^_^

In Rome, I remember standing in line for this frieze of a Roman figure but I totally forgot the name haha!

The one singular stone I can’t forget is the Intihuatana in Macchu Picchu. Visitors these days touch the stone in the hope of harnessing its special powers.

Hi Aleah, what a delightful and interesting post. I’ve been to most of those places but I didn’t know about the lucky scuptures:( Damn, I missed some chances for good luck. I hope they come true for you!

@ Salika: Yeah, that’s true. Italy also has lots of wishing fountains like the Trevi 🙂
@ Alice: Thanks! Verona is indeed a charming city!

The famous statue of Juliet! Haha Can’t wait until I go there! Great post, loved all the pictures!

Europe has quite a lot of statues and ponds that bring good luck, especially in Italy. Nice photos, Aleah!

@ Photo Cache: There’s a lot of them in Europe 🙂
@ Nini: Well, going there once was not enough. I would like to go back too 🙂

Wow this is the first time I’ve heard of those lucky statues! I really wish I can travel around Europe like you did!

pretty interesting. i haven’t been to a place where they had something “lucky” to touch or see to induce luck. lucky you 🙂

@ Doc Wends: He’s also called St. John the Martyr 😀
@ Mary: Prague in summer will be wonderful. I’m sure it can get very crowded there though!

Great and timely idea for a post, Aleah! We’ve only been to the one in Brussels. You can bet we rubbed it for good luck 🙂 We’re going to be in Prague this summer so we’ll be looking for St. John Nepomuk.

awesome sculptures these are and great finds. I’d love to check on St. John of Nepomuk 🙂