Experiencing the Magic of Siquijor, the Island of Fire It was a few minutes to midnight. As I slowly wove my way around Larena, Siquijor, on my way back to the inn, I wondered vaguely if it had been a good idea to refuse a ride from my “date.”

I don’t scare easily, and I have walked a lot of dark streets in my time, but the combination of Siquijor and midnight, plus nobody at all on the streets aside from me was enough to raise goose bumps.

However, I pushed on, noticing every single detail of the dimly lighted streets. Far away, I saw a clump of lights on a tree; I couldn’t believe my eyes. It was a swarm of fireflies—the phenomenon that gave Siquijor its name!

I arrived in Larena from Dumaguete the day before, fresh from some work-related trips in Bacolod and Bayawan. I met up with Flo Benlota, member of CouchSurfing Dumaguete, and left my huge pack with her. Armed with just a daypack, I booked a ticket to Siquijor.

On my way to the island, I could not help but observe how calm the waters were. I could see the silhouette of Siquijor, shrouded in mist but visible just the same. I reviewed all the things I was told about Siquijor: it is full of witches, don’t take any food from strangers as you could be ensorcelled, make sure you have something to ward off the evil eye when you go there.

This reputation is the primary reason why a lot of people I know don’t want to go there. What will I find when I arrive? I couldn’t wait!

When I arrived in Larena, I had no idea where to go. To my surprise, I found a lodging house/inn right off the pier. Luisa and Son’s Foods and Lodge was at the foot of the road going into the pier and when I asked the owner, there was indeed a room available (it turned out I was the only guest). One room cost P150/night so it was right up my alley. A street in Larena at midday.

After freshening up, I went to Siquijor town to eat lunch, a delicious, P25-meal consisting of steamed corn and fish. The waitress/owner/cook was very helpful when I asked how to go to Cantabon Cave. She herself went out of the restaurant and called a habal-habal (motorcycle) driver. “Bring her to Cantabon!” she said. It turned out the guy was her nephew. (Cost: P150 return trip.)

On the way to Cantabon, the driver interviewed me. Was I married? Why was I traveling alone? Then he told me a secret. The guide rate in going to Cantabon was P500 for one to three people. He could get me a discount—I will pay only P100—because he knew the barangay captain. However, he said that he wanted to go and I should pay for him as well. He had never been there himself.

I agreed. It was very much worth it! I love spelunking, and Cantabon is one of the few caves that really impressed me. It is a 300-m long cave, pitch dark and full of interesting stalactites and stalagmites. I especially liked the bathtub and the king’s bed. We had a bit of a scare because the lamp our young guide carried turned out to be used and not fully charged. I had no headlamp, and we had no other source of light.

Thankfully, though, we made it back without mishap, except perhaps for me getting wet. There are places in Cantabon where the water is a bit deep, so expect to get wet and dirty when you go.

This is where it began to get interesting with my motorcycle driver. He said that it was the town fiesta in Larena and he wanted me to go to his house that night for dinner. Having nothing else to do, I agreed. Their house was in a compound, where neighboring houses were also owned by relatives, so the air of festivity was quite strong in the area, despite it being around dinner time already. There were a lot of  children chasing each other around, a group of people cooking, while some were chopping and preparing the ingredients, setting the table, calling to the children, talking to the visitors, among a hundred and one things people do during a fiesta. There was even an old guy surrounded by children, telling stories!

A few of them said hi to me, their gazes questioning, then went back to what they were doing. I looked at the dishes—all pork and chicken and beef—so I was quite glad to be semi-vegetarian then.

The driver’s mother apologetically told me that the food was not ready. So we decided to go to the pier. The port of Siquijor town is wonderful. The water is so clean and clear, that during the day you will see where the green ends and the blue begins.

On that cold night, though, I never noticed it. Foremost in my mind was what the driver was telling me. He loved me, he said, could I be his girlfriend? We were sitting on the pier, and while he kept moving close to me, I kept moving away, maintaining my smile. I told him I had a boyfriend, and besides, long distance relationships don’t work, but he kept on insisting that he liked me. Strangely enough, I never felt afraid, nor did it worry me that he was my only source of transportation. I knew that if push comes to shove, I could take care of myself.

One kiss, he said. I said no. And I kept saying no until he got the idea. We got on the motorcycle and I told him I would rather go to the Larena town plaza than back to his house. I told him I’d buy him a beer.

So we spent a few hours watching the performance of some bands, talking about nothing in particular. When it was almost midnight I told him I had to go. I didn’t want him to know where I was staying, so I chose to walk alone.

As I got nearer and nearer to the well lighted tree, I realized that they were not fireflies after all, but ordinary string lights wound around the tree. I was disappointed, but only a bit so. Siquijor has given me more than enough to remember already.

Here are more Things to Do in Siquijor Island, Philippines. This is my entry to the 2nd Blog Carnival of the Pinoy Travel Bloggers called  “Quaint Places” in the Philippines. 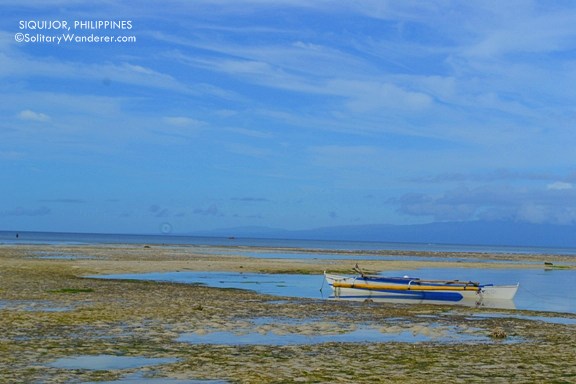 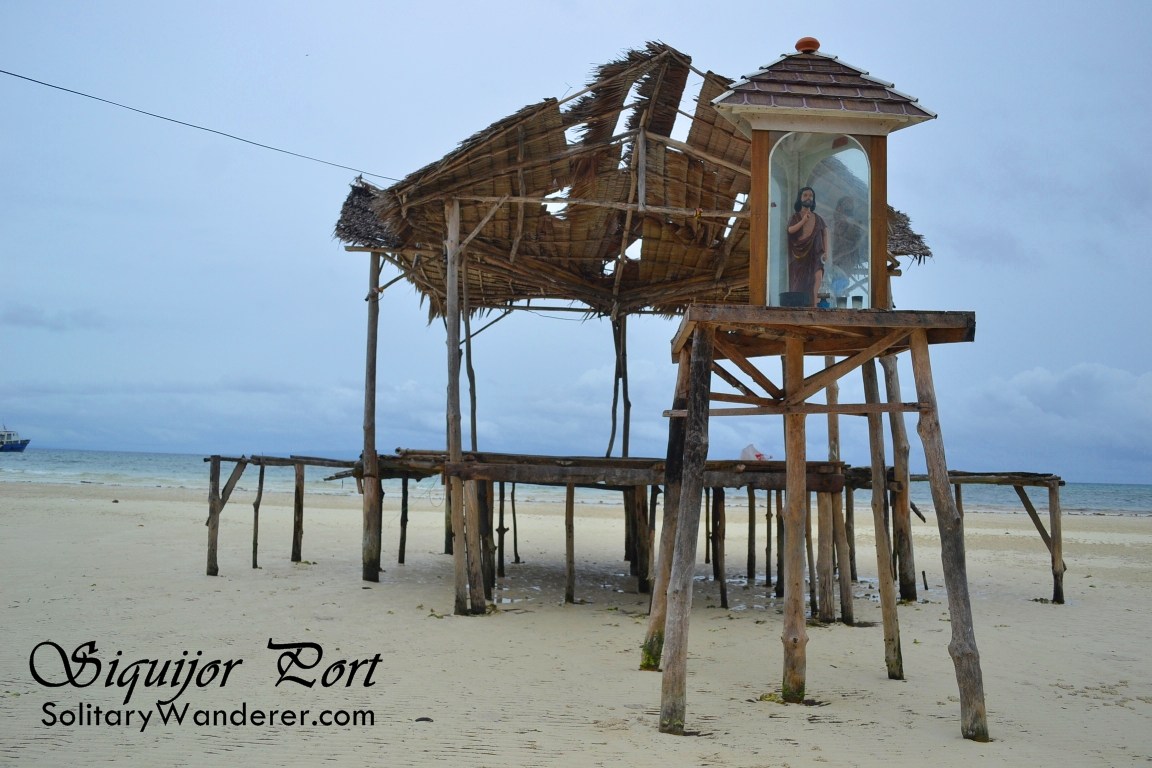 Things to Do in Siquijor (A One-Day Itinerary)

@ Penfires: Yeah, he had to leave me alone, I was quite firm in saying no. If he left me behind, there were tricycles there who could take me back to the inn 🙂 Thanks for dropping by my blog!

Whoa! the driver must have been blown away by you! Anyhow its one of those things and happenings that makes us never forget a place =) Glad to know the guy left you alone in the end.

@ Kareen: I only stayed in Larena–very budget at P150. I don’t know how much you intend for your accommodations, so check out this link (not mine) for your lodging options:

Hello, Aleah.. I’m wondering if there’s a resort that you can suggest where I can stay in Siquijor. I’m planning to spend by bday in Siquijor alone and I’ve been saving for that trip since day 1 of January. hehehe.. thanks

here’s my own Siquijor experience without the freaky part. hahaha. http://cheaptravelforwomen.blogspot.com/2011/12/fear-not-siquijor-5-ways-not-to-fear.html

LOL sis!! you scared me with your post..hahaha..thanks for sharing!

haha, the infamous Siquijor lover boy! I think you omitted some parts of your interesting story. You never mentioned here the love potion he tried to give you LOL

Wow, Al! I didn’t know you were this brave! Congrats! (for making it there and back home safe and sound!) And yeah, the cave reminds me of the Sumaguing of Sagada. I miss travelling… 🙁

been to Siquijor a week ago,refusing an invitation seems to be hard to do this side of the country. anyway, you were classy swaying him away. but saying i love you, you gotta hand it out to the guy!

@ Ron: it is NOT an affair! LOL
@ Gael: Sagada's caves are longer, but yes, the limestone stalagmites reminded me of Sumaguing. 🙂

this is very interesting… on the road affair is so delicious it got to be so fattening! hahaha kiddin'

Hi again! Thanx so much for visiting and following my blog – please come back and look around often!!

What a fascinating story – both the travel destination and your personal experience! Interesting that you weren't afraid – I believe we can sense if we are in danger, and you obviously weren't!!

Wonderful post about the lovely Siquijor. But oh my gosh, if I were in your shoes, I would have been totally freaked out by that driver! I'm glad everything turned out okay. 🙂

this is what i missed when i did the central visayas backpacking trip. now, it invites me to come again. yay, siquijor. and very cheap yung place, thats what i want.

If I were in your shoes, I'd be scared of that guy, Aleah. Good thing he didn't do something bad to you.