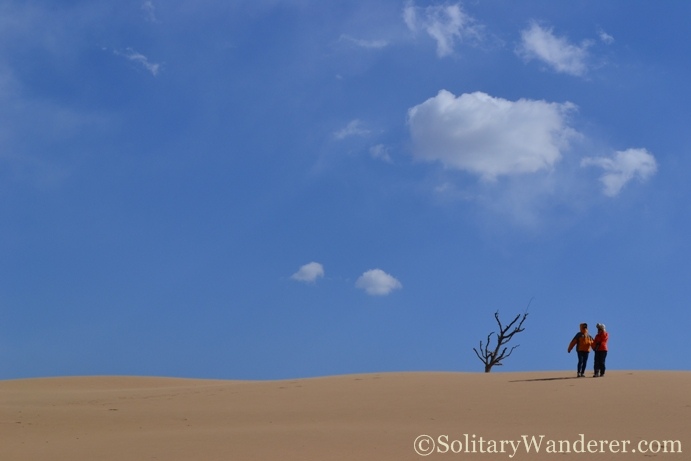 From the Great Wall to the Forbidden City, the Summer Palace and the Temple of Heaven, to the numerous temples and small alleys, there are so many things you can see in Beijing, the capital of China.

If you have a lot of time to explore it, why not go on a day trip from Beijing and see all the other attractions the region has to offer?

Just around two hours from Beijing is a desert seemingly dropped out of nowhere—a small stretch of sand amidst the lushness of the countryside. This is the Tianmo Desert in the Hebei Province. 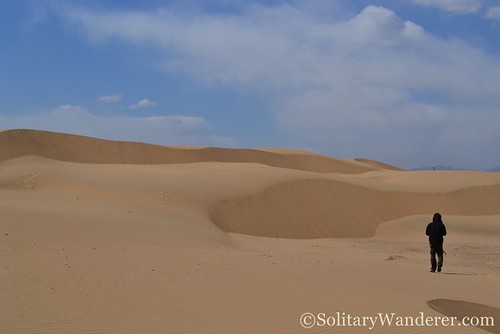 Looking out into the sand dunes.

Located at the foot of the Dragon Treasure Mountain around 90 kilometers from Beijing, Tianmo features two huge sand dunes.

Its presence in the area has confused the locals for some time; why would there be a desert in the middle of lush vegetation? Its seeming incongruity has earned it the name “Heavenly Desert,” and its origins remain a mystery. 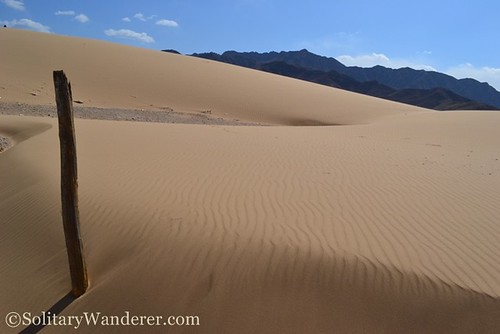 There used to be camels here, and visitors could pretend to be desert people and ride the camels from one end of the sand dune to the other. Other people said that there were also fun activities like horse racing and sand skiing, plus driving rough-terrain vehicles up and down the sand dunes.

When we arrived though, only a sleepy dog met us at the gate, and an old man who gave us the tickets. There were nothing and no one else in the sand dunes except for structures like these which used to shelter desert animals. 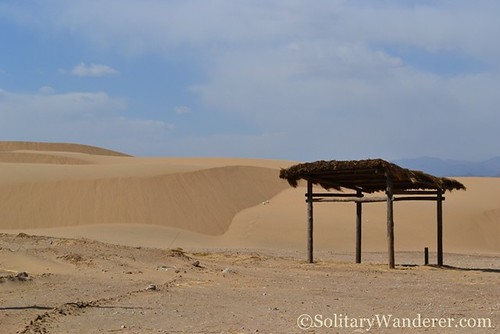 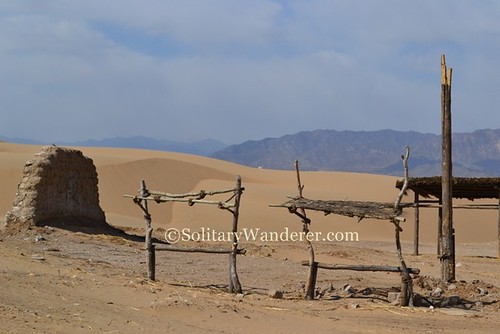 There was a “cave” too, which looked convincingly like a real stone house. My friend told me to knock on it, and I was surprised to feel it yield under my hand! The whole house was made of plaster, part of a movie set shot here in the desert. 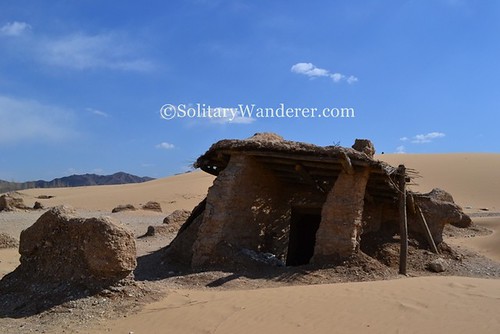 A real cave? Not!

A huge tire also looked convincing, until we saw through a tear in the rubber the styrofoam with which it was made. It made me knock on the trees as well, to see if these were real (yes, they were).

Beyond the sand dunes, we could see the man-made Guanting Lake, its windmills producing electricity. We went there afterwards, but unfortunately, the roads we had chosen were blocked by construction equipment. Too bad, really. It would have been wonderful to get close to the windmills. 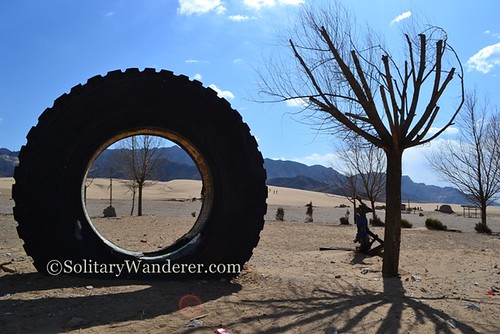 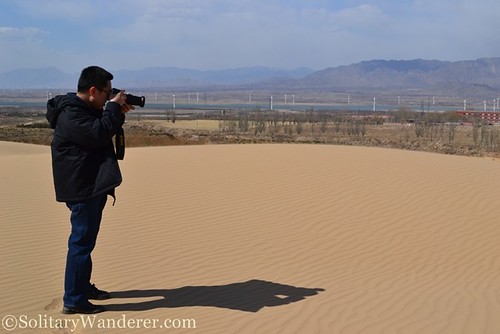 A view of the Guanting Lake with its windmills in the distance.

So if you have a bit of time to spend in Beijing, take the chance to go visit Tianmo, the Heavenly Desert, in the Hebei Province. You can either take a guided tour in any travel agency, take a cab, or take the 919 bus from Beijing. If you choose the latter, be prepared to walk because there is no public transportation going directly to Tianmo. We had a private car so it was easier to get around. 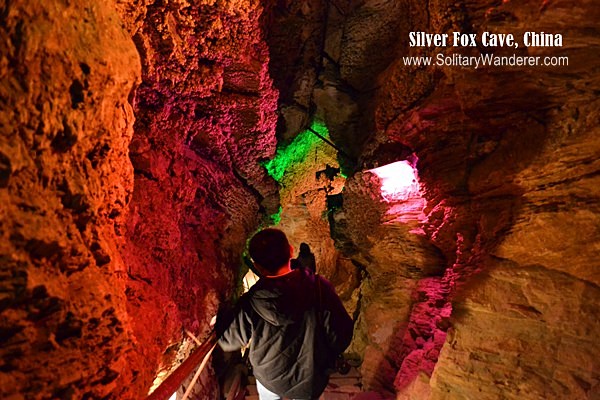 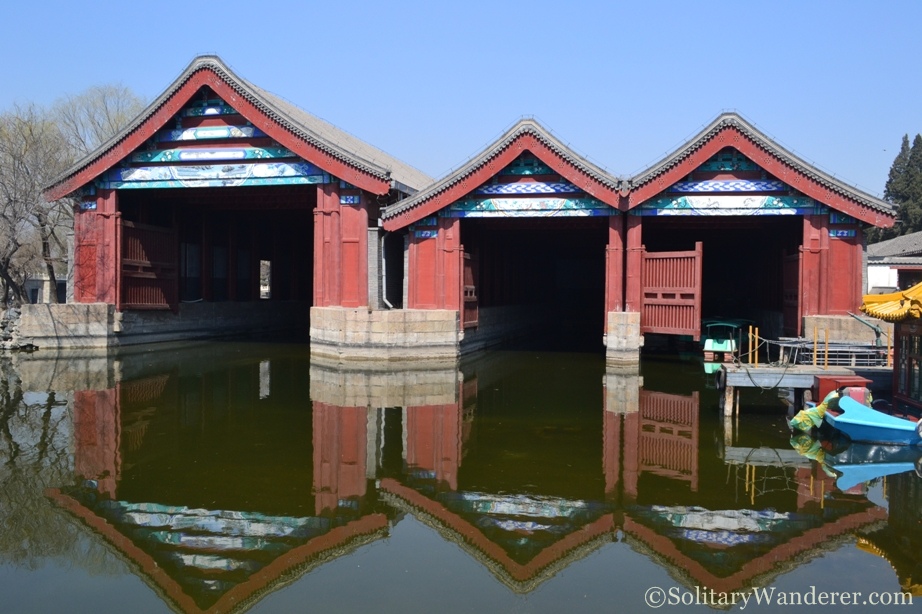 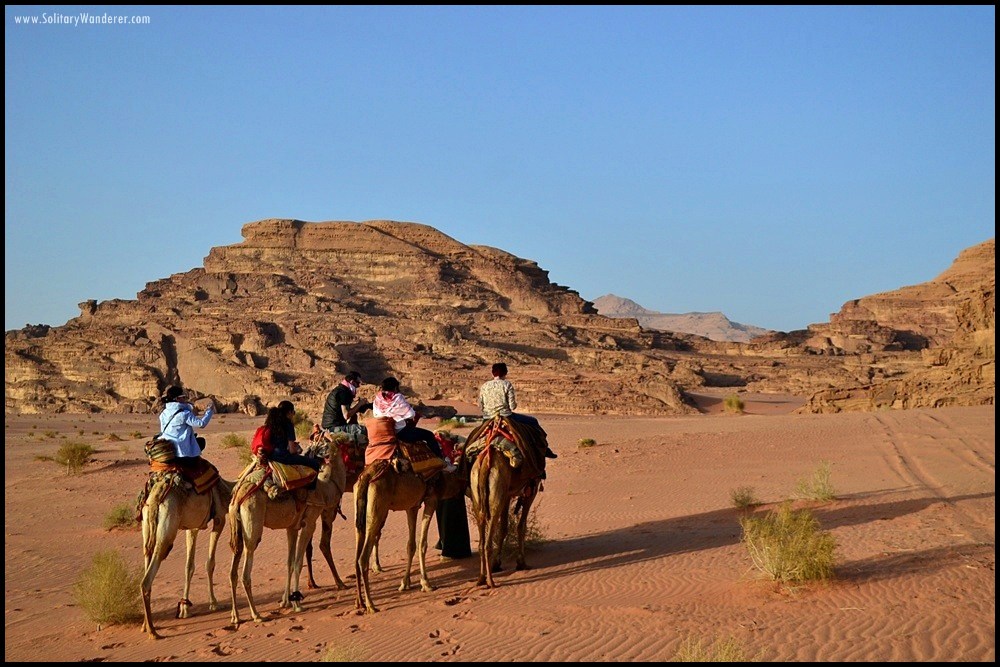 Sunset in Wadi Rum: A Wonder to Behold

[…] I had never been to a “real” desert before. I’ve seen sand dunes, yes (Read: Tianmo Desert, China) but none could compare to the vastness and beauty of Wadi […]

@ Maya: Sorry but I don’t know if Bus 919 passes from Dongzhmen. It’s not a very far walk, but then again, I’m used to walking 🙂 Perhaps a better alternative would be to book a tour from Beijing.

Hi everybody, I want to know does bus 919 go from Dongzhmen and how long does it take to walk from lost bus stop to desert ? I like photos and text 🙂

[…] It’s definitely not NG material, but for some reason, I really like it. The subject is a sand dune two hours from Beijing. It’s small and it’s surrounded by vegetation, making it deserving of its other name […]

@ Dong Ho: Yeah, it’s a good place to visit. It’s quite peaceful as compared to the other Beijing tourist destinations. See you around!

Reply
Chronicling the Learnings from the Year that Was and Planning for the Future that Will Be | Solitary Wanderer
January 1, 2012 5:42 am

[…] and Begnas in Sagada), and finally got my certification as an open water diver. I had also gone to Beijing, China; Bangkok, Pattaya, and Sangkhlaburi in Thailand; Singapore; and Kuala Lumpur. Learn to notice and […]

just found this from angel’s post. i hope i can insert this on my trip to beijing next year!

Cat, it was really too bad you didn’t push through. We could have had a great time together. I didn’t see Charlie there, though. 🙁

I feel bad for skipping out on my Beijing trip!
have to rebook and will visit this place too 😀

@ Vira: Yes, it’s a wonderful place! There was sand boarding before, just not when we came. Probably because it was winter??

Wow great place to visit. Hope sand boarding is played in the area.

@ Leo: thanks, the place was beautiful.

@ Travel the Desert: deserts are beautiful in their own way. I didn’t realize this until I’ve seen Tianmo!

Thanks Ian. I would like to study photography more para hindi tsamba ang kuha hehe

nice composition aleah! i love it!

Hi Gay! I’m sure Tianmo is a much, much smaller desert than anything you’ve ever seen 😀

Awww… your post made me miss the middle east 🙁

@ Nette: This desert is used a lot in Chinese movies. You can just imagine if they all leave their props behind!

@ Pinoy Adventurista: Thanks. It was a “desert” but it was very cold at that time! Ironic huh.

@ Red: I would love to go visit Australia someday. Your posts really inspire me 🙂

What an amazing place!! It actually looks very similar to outback Australia – except that the sand isn’t red enough!!

Have a great weekend!!

Too bad the movie crew didn’t clean up their mess, though others would think those leftover props could add some character to the place. Still, I disagree.

Perhaps next time you’ll have photos of the windmills. 🙂