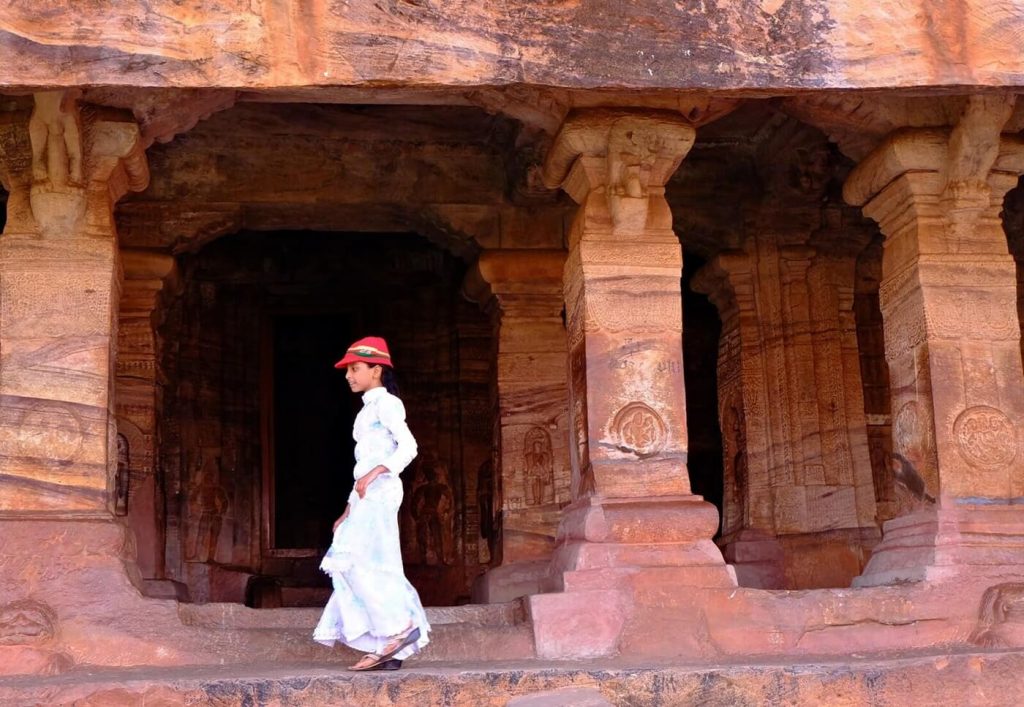 I bet you’ve heard of Petra in Jordan, or seen it in the Hollywood movie Indiana Jones. It’s spectacular, isn’t it? That beautiful rock-cut monument will forever be a testament to humanity’s creativity. Did you know, though, that India has rock-cut architecture as well? I didn’t until I visited the Badami Cave Temples in Karnataka during the Great India Blog Train last year.

Dating back to the 6th century, the Badami cave temples are four Hindu temples cut from rock cliffs. The complex is by the banks of a man-made lake and is one of the best examples of Hindu temple architecture in India, which include the Elephanta Caves (in Mumbai) and Ellora (in Maharashtra).

Badami doesn’t get as much press as other tourist destinations in India, unlike the Taj Mahal, for example, so I’m really glad we got a chance to visit it.

History of the Badami Caves

Founded in 540 A.D, Badami (formerly known as Vataapi Badami) used to be the capital of the Chalukya dynasty that ruled a big part of Karnataka from the 6th to the 8th century.

Made out of sandstone hills, the Badami Cave Temples marked the rise of the Chalukyan style of temple architecture that features the North Indian Nagara style and the South Indian Dravidian style. It is a candidate for UNESCO World Heritage accreditation under the title “Evolution of Temple Architecture.”

There are four temples in the complex, linked by a path with a view of the Badami town and the Agastya Tirtha Lake. Carved out on a hill cliff, the cave temples each feature beautiful murals, an entrance with a veranda supported by columns and brackets leading to a main hall, and a pillared outdoor hall that leads to a small sanctum which houses the sculpture.

Built around 578 A.D., the first cave temple is made of red sandstone and believed to be the earliest to be created among the four temples. It is about 18 meters above the ground and located on the northwest part of the hill.

The 40 steps leading to the entrance feature columns with carving of ganas (Lord Shiva’s servants) that seem to hold up the cave floor. Its veranda is constructed using five columns with reliefs of various objects including flowers and jewelry.

Dedicated to Lord Shiva, the cave depicts the lord as the dancer Nataraja with 18 arms. The cave contains depictions of at least 81 dancing poses of Nataraja.

Over 60 steps above and to the east of Cave 1 lies the north-facing second cave temple. It has the same floor plan as the first one but is smaller.  Construction is estimated between the 6th century and early 7th century.

The entrance to the cave is a veranda divided by four square stone pillars with ends as half pillars.  On each side of the entrance are guardians holding flowers instead of weapons, while the pillars are decorated with mythical dwarf carvings in various facial expressions.

Dedicated to Vishnu, this cave temple depicts the lord in his Trivikrama form, measuring the earth with one foot, the sky with another, and a third foot resting on the head of Mahabali.

Facing north, the 100-feet deep third cave is 60 steps above second cave. Created between 578 and 580 A.D., Cave 3 is the earliest dated Hindu temple in the Deccan region. With a 21-meter wide facade, Cave 3 is also the biggest and most popular of the Badami Cave Temples.

This cave temple features a row of huge columns and paintings on the ceiling. (It is unfortunate that previous restorations on the ceiling haven’t done justice to it!) It also highlights artworks that give regional culture and clothing information during the 6th century.

Dedicated to Vishnu, the primary theme of this cave is Vaishnavite. It plays a significant role in Shaivism studies. The cave showcases intricately carved friezes and giant figures of Anantasayana, Vasudeva, Varaha, Harihara, Narasimha, and Trivikrama. There is also a statue of Vishnu sitting on a serpent, Adisesha.

Among this cave temple’s noteworthy murals are that of four-armed Brahma on his swan, and a depiction of the marriage of Shiva and Parvati.

Badami Cave 4 — The Only Jain Temple

Located east of Cave 3 is the sole Jain temple in the complex. It is estimated to be newest among the Badami Cave temples, dated between the late 7th century and 8th century. Some of the embellishments are thought to have been added as late as the 11th and 12th centuries.

The smallest of the four cave temples, Cave 4 may be less elaborate but is just as beautifully adorned. This cave has a diverse range of detailed carvings, including that of a seated Jain Saint Mahavira, Tirthankara Parshavnatha.

Other Caves in the Badami Complex

Aside from the four main caves, Badami is also home to many other cave monuments and medieval era temples.

Between 2013 and 2015, a fifth cave was reportedly discovered about 500 meters from the four main caves. Located on top of a boulder, this cave can be reached through a mud road. A stream of water gushes from this huge boulder all year round.

Near the controversial fifth cave, there is also a small shrine that is home to a 7th-century rock carving of Anantashayana Vishnu. A reclining Vishnu is depicted as giving birth to all of existence, and above it are his 10 avatars. There are also reliefs of Brahma cord connected to Vishnu’s navel,  the Trinity (Vishnu, Shiva and Brahma), a human couple, and a cow nursing her calf.

What You Need to Know about Visiting the Badami Cave Temples

Are you planning to check out the Badami caves? Here’s what you need to know.

How to Get to Badami

There are trains going directly to Badami from Bangalore and Hyderabad, and a bus from Mumbai. The Badami cave temples are just around 5km from the train station. When you arrive at the station, get on a bus outside and ask to be dropped off at the Badami bus stop closest to the caves.

For foreign tourists, entrance fee to the Badami cave temple costs 500 rupees (as of February 2018) while Indian nationals pay 30 rupees. The ticket booth is in the parking lot before the entrance to the complex. It is open from 6am to 6pm, but since it can get really hot here, the earlier you go, the better.

The best time to visit is on the cooler months, from November to February. Put on sunscreen, bring an umbrella or a hat, and of course, lots of water. WORD OF WARNING: There are a lot of monkeys in the complex. Make sure you hold on to your belongings!

While you may be tempted to just go and look at the caves, it’s highly recommended to join a guided tour when you’re there. There are English-speaking tour guides available, and the guide could tell you what the carvings mean as well as the history of the caves.

When you’re planning to visit the Badami caves, combine it with a visit to Hampi, another highly-recommended, and yet under-promoted, destination in Karnataka. Read my post about it: The Ruins of Hampi, India: Visiting the Capital of a Once Mighty Empire.

Have you been to the Badami cave temples? What did you think about it? 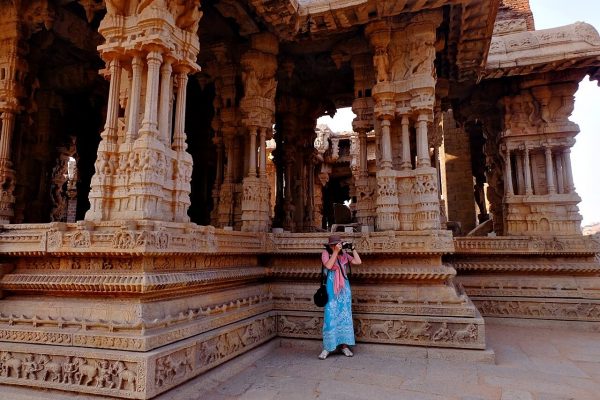 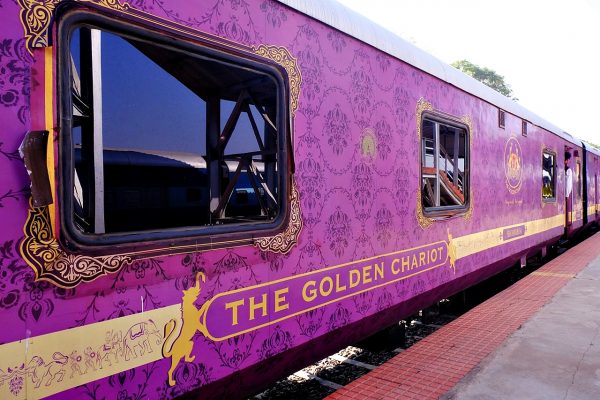 My Golden Chariot Review: What’s it Like to Take a Luxury Train in India? 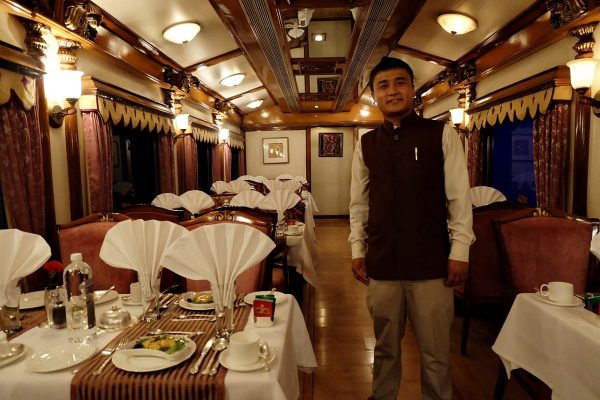 The Great Indian Blog Train: Journey through India in the Golden Chariot